New Delhi: As the sun goes down today, Jupiter, the largest celestial body after the Sun in the solar system, can be seen in the sky with naked eye. 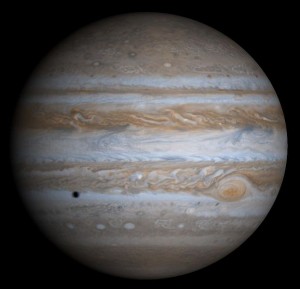 “The planet (Jupiter) will be closest to the Earth, so it can be seen with a naked eye an hour after the sunset in the eastern direction today (Monday) evening. It will be visible all through the night,” said C.B. Devgan, president of the Science Popularisation Association Communicators and Educators (SPACE).

Jupiter, which has a large number of natural satellites, will be in ‘opposition’ to the sun Monday night.

“The planet will be directly opposite to the sun. At its opposition, the planet is fully illuminated by the sun and appears disc-like. The planet will be closest to the Earth and thus would appear bigger and brighter than usual,” he said.

According to SPACE, in positional astronomy, “opposition” defines that position of a celestial object when it is on the opposite side of the sun in the sky when viewed from the Earth as reference.

“The ring planet will be at 566 million km, which is very close to its minimum distance from Earth, it occurs once in 13 months,” he added.