New Delhi: Attributing the success of the Tibetan democratic experiment in exile to Indian values and traditions, Tibetan Prime Minister-in-exile Lobsang Sangay Monday said that the country “owed its religion to India”. 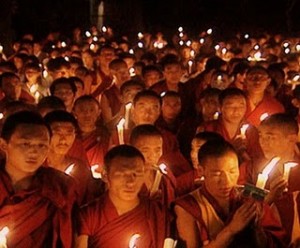 “Tibet owed its religion to India and that it is owing to the proximity to India physically and spiritually that the Tibetan struggle has conformed to the tenets of ahimsa (non-violence), dialogue and reconciliation,” said Sangay, who took over as political successor to the Dalai Lama.

The Tibetan leader was speaking at the ‘Sixth Dr. K.R. Narayanan Memorial Lecture’ on the theme — ‘Democracy in Exile: The Case of Tibet’ at the Jamia Millia Islamia here.

Harvard-educated Sangay, who was elected head of the Central Tibetan Administration, said that the Tibetan democracy, above all, owed itself to the vision of His Holiness the Dalai Lama.

On the importance of Tibet’s water and ecology, not just for India but for the environment sustainability of the world, Sangay said that continued destruction of natural resources, mindless expansion in the name of development and extensive militarisation will only add to global climate worries.

The Dalai Lama has lived in India since fleeing his homeland in 1959. The Tibetan exile administration is based in Dharamsala in Himachal Pradesh.

Some 140,000 Tibetans now live in exile, over 100,000 of them in India. Over six million Tibetans live in what is now known as the Tibet Autonomous Region in China.