He has seen it all before – straddling the political landscape of Himachal Pradesh for five decades, veteran congress leader Virbhadra Singh turned the tables on his opponents, both inside the party and outside, yet again, to bounce back and brush aside the challenge thrown to deny him the 6th term as chief minister.

Unanimously elected as chief minister by the congress legislature party late on Saturday evening, the last chapter of Singh’s political autobiography, a book that he has been penning for some years now, only opened on Christmas Day, 2012 with the swearing in at The Ridge for the 2013-18 term in office.

Born into the royal family of Bushair, a pre-independence princely state bordering Tibet, Singh’s political career has been one of continuous struggle.

Having remained a member of Indira Gandhi’s cabinet in 1976 -77 and 1982-83, Virbhadra was first made chief minister in 1983, replacing the incumbent Thakur Ram Lal who had to resign. 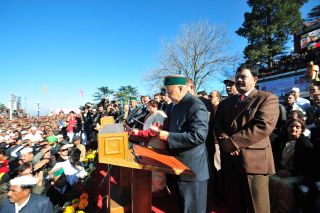 It was in the 1983-89 term that he turned around the states forest policy and imposed a ban on green felling of trees, something that no government after him has dared to overturn.

Expanding area under apple plantation was proving to be bane for the thickly forested lands of spruce and Himalayan cedar trees, which were being mercilessly felled to meet needs for wooden boxes for packaging and marketing of fruit crops.

A timber mafia had also become active then that smuggled the high valued timber into other states – something what had cost Virbhadra’s predecessor his chair.

Losing the 1990 elections to BJP and dismissal of the Shanta Kumar government under Article 356 in 1992 in the aftermath of the Babri Masjid demolition provided an opportunity to make a comeback.

The odds were stacked against Virbhadra Singh for he faced a strong political adversary in Sukh Ram, who then was a powerful minister in Prime Minister Narsimha Rao’s cabinet.

On the ground the position of chief minister was being challenged by Vidhya Stokes and was backed by Sukh Ram. Stokes lost the 1993 election and it was Sukh Ram himself, who threw his hat into the ring in an attempt to dethrone Singh.

The Congress high command appointed powerful Punjab leader Beant Singh as observer to oversee the election of Sukh Ram as the leader of Himachal legislature party. The bid failed as legislators loyal to Singh remained holed up in an up market hotel in the city and backed Singh’s name, when a trial of strength needed to be demonstrated.

Having defied the congress high command diktat, in the 1993-98 period, the government under him faced severe financial distress and the state’s finances came under a debt burden, something that has kept on mounting ever since.

Focus on public health and education over a period of time did pay dividends as not only literacy levels improved but the state came to acquire one of the best public health infrastructures among all hill states.

Calling for a mid-term election, as the government still had a year to go in office in 1998, boom ranged.

Bete noire Sukh Ram, who was caught up in the infamous telecom scam and had to quit Congress, floated a regional party that won just four seats but held the balance of power in the 1998 elections which had thrown up a hung assembly.

A coalition government of BJP and Himachal Vikas Congress placed Prem Kumar Dhumal as fifth chief minister of the state.

It was an uphill task again in the 2003 election, where the rival faction in the party was backing Stokes and was backed by Congress high command, which had come under the control of Sonia Gandhi.

Efforts to shift the congress legislature party meeting to Delhi failed and when the trail of strength was conducted in the ruling lounge of Vidhan Sabha in presence of observer RK Dhawan, Virbhadra was declared as the chief ministerial candidate, much to the dismay of opponents yet again.

The 2003-07 term came to an end abruptly when Singh for the first time in 16 years after becoming chief minister of the state travelled to US for signing of an accord with World Bank and the election commission of India declared an early general assembly poll in the state.

The 2007 election BJP regained power with a thumping majority of 42 legislators and Congress was reduced to 23.

When every seat in parliament was considered crucial in the 2009 parliamentary elections, Virbhadra, fighting age, contested the Mandi parliamentary seat and won.

It was for the fifth time that he was contesting a parliamentary seat, with 1962 being the first time when he entered parliament, just after passing out from St Stephens College, Delhi.

Detractors got at him again. A two decade old telephone conversation captured on an audio tape was made the basis of a corruption case; it was investigated and a trail court framed charges.

Virbhadra Singh, who had forced his way into the Prime Minister Manmohan Singh’s cabinet after initially being denied a berth in favour of Anand Sharma after the 2009 elections, resigned to face the trail court and the corruption charges.

Pushed to the wall, an attempt was made to keep him out of the 2012 elections, but when it dawned upon the Congress high command that none but the veteran congress leader could deliver a much needed victory for the embattled party, Virbhadra was made state president and put in charge of the campaign just ahead of the elections, something that he has delivered and lived upto his reputation.

Having secured a majority of 36 seats in a house of 68, there was no stopping Virbhadra this time.

A single line resolution adopted by congress legislators in the same ruling lounge of the Vidhan Sabha authorizing party President Sonia Gandhi to name the states new chief minister, firmly came back with a reply that none but the 78 year old Virbhadra Singh would be  the chief minister yet again.