Dehradun : With two senior Congress leaders of Uttarakhand, including union minister for water resources, Harsh Rawat, having openly said that fingers are being raised at the presence of two senior IAS officers at the shooting venue of liquor baron Ponty Chadha at his Chattarpur farmhouse in Delhi on Nov 17 and there should be a probe in the matter, why is chief minister backing out ? 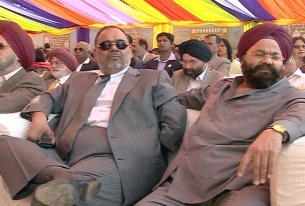 It may be mentioned here that from day one, that is when the two Chadha brothers were killed, there were reports that two IAS officers of Uttarakhand were also present at the venue. However, being at a little distance from the gate of the farmhouse when the firing started, they are reported to have made their get away, without coming to the limelight.

However, reports of the bureaucrats being present have been making news in this small mountain state. In fact, one of the two officers was supposed to be present for a meeting in Delhi on that particular day, and had told the other officers that he would not be able to make it at the meeting, but would sign the minutes later. What was so important as to keep him away from the meeting, and why has he not made it public.

Ever since this question was doing the rounds, union minister for water resources, Harish Rawat when asked about the presence of the two officers, said that the chief minister must get the matter probed by the CBI, so that the truth surfaces in the matter.

Thereafter, food minister in the state cabinet, Pritam Singh, wrote to the chief minister that taking the sensitivity of the matter and the fact that the main accused, Sukhdev Singh Namdhari was also the chairman of the Uttarakhand Minorities Commission, a CBI probe should be ordered into the allegation, but the chief minister has ruled out any such enquiry.

Incidentally, senior Congress leader and MP from Garhwal parliamentary segment, Satpal Maharaj has also joined the chorus for a probe into the presence of the IAS officers at the shooting venue by the CBI. “Why has the chief minister turned down the probe, is something that only he can answer, but there should be a probe”, he added.

Incidentally, there are reports that quite a few of the ‘babudom’ in the state were in close contacts with the liquor barn and had even invested some of their money in the business of Ponty Chadha from where they were getting returns, which is perhaps why, a minister of the state cabinet had written to the chief minister for a CBI probe.

Also, it is by now a well known fact that the liquor baron had a number of business interests in the state from retail and wholesale of liquor to soft stone mines, real estate and hotels and resorts and there are even report that a number of benami transactions had also been done by him in which Namdhari was also an alleged kingpin.

The Crime Branch of Delhi Police which is investigating the high profile murders of the two Chadha brothers, has also made a number of visits to the state, including the caopital city to probe into the various business links and benami transactions of Ponty Chadha to get some vital clues into the murder.