Mumbai: A day after getting all powers to manage Shiv Sena, its executive president Uddhav Thackeray Tuesday donned a new mantle — that of the editor of party mouthpieces Saamana and Dopahar Ka Saamana. 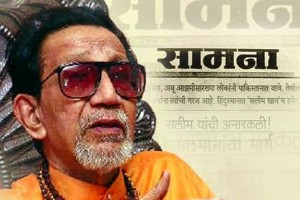 Shiv Sena patriarch Bal Thackeray, who edited the two newspapers till his death Nov 17, is now ‘founder-editor’ of the dailies.

Till Monday, Bal Thackeray’s name continued to appear on the front-page below the masthead as editor of both the newspapers.

Indicating his desire to keep a low profile, the name of Uddhav, the son of Bal Thackeray, appears only in the printline of the last pages of the two papers.

Marathi broadsheet morninger Saamana was founded Jan 23, 1988, as a party mouthpiece to convey Thackeray’s views to the Marathi masses.

Over the years, Thackeray mastered the art of using the two newspapers columns — through acidic edits, rare signed edicts and an occasional personalised message to party activists — sparing none, be they relatives, friends or foes.

For the first time in their history, the newspapers sported full black front pages the day after Thackeray’s death (Nov 18) and the day after his public cremation (Nov 19).

Little wonder, Saamna was usually the only Marathi newspaper placed on the office desks of all incumbent Maharashtra chief ministers.

While Uddhav will be the new editor, the papers’ routine affairs will continue to be managed by trusted executive editors Sanjay Raut (Saamana) and Prem Shukla (Dopahar Ka Saamana) as in the past.

Published by veteran party leader Subhash Desai, the newspapers are run by the Prabodhankar Trust and printed in its own printing units in Vashi in Navi Mumbai.