Hanoi: At least four children died when the bomb from the Vietnam War they were playing with blew up, police said Monday. 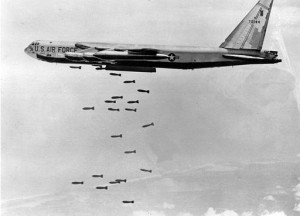 The accident occurred on Dec 2nd in a village in Vinh Long province as the kids began fooling around with it in a field of bamboo, The Vung Liem District Police Department said.

The explosion instantly killed a 4-year-old girl and two boys, aged 6 and 1, while another 6-year-old died in hospital. Two children, aged 5 and 12, and two adults were admitted with severe burns.

Viet Cong communists operated in the area during their wars, first against France and later against the US, and were the target of intense bombing by US aircraft.

About 42,000 people have died since the war ended in 1975 from lost bombs, a third of them scrap dealers looking for bombs to deactivate in order to sell the metal.

Some 15 million tonnes of bombs were dropped during the war, of which around 10 percent never exploded, Renew, an organization dedicated to deactivating explosives, said.