Jammu: The pilot and a woman passenger of a Pawan Hans helicopter were injured when the chopper, carrying five Vaishno Devi pilgrims, made an emergency landing near here today, a shrine official said. 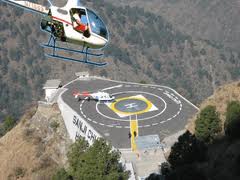 All other passengers were safe, said the Shri Mata Vaishno Devi Shrine Board official.

The helicopter made the emergency landing at Trapdi village, around 15 km from Katra, the base camp of the pilgrimage, following a technical snag in its tail rotor.

The chopper was flying from Sanjhi Chhat, a spot two km from the shrine, to Katra.

The Hindu shrine is nestled in the Trikuta hills at an altitude of 5,500 feet.