Moscow:  Russians should develop “self-discipline” based on moral ethics to battle deep-rooted corruption in the country, exiled Tibetan spiritual leader the Dalai Lama has said. 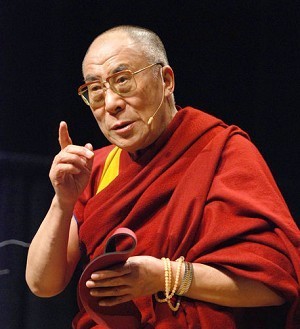 “Corruption is due to the lack of self-discipline,” the Dalai Lama told RIA Novosti news agency in an interview in India.

“According to moral principle you deliberately restrain from doing these things. This is the only answer,” he said, adding that without it law enforcement alone will be unable to overcome the problem.

The Dalai Lama also spoke out against consumerism, saying that a focus on material values makes people “unhappy and lonely inside”.

“I am quite sure that Russian millionaires who have a lot of money, deep inside feel some kind of anxiety, too much stress. Perhaps, they may drink vodka, day and night,” the spiritual leader said.

The Dalai Lama expressed hope that his visit to Russia is still possible despite the political obstacles. He first travelled to the Soviet Union back in 1979, paid an informal visit to Russia in 1992 and addressed the State Duma in 1994, but has been denied a visa since then.

“Sometimes I wonder, why under the communist authoritarian system I could visit there, and now, when Russia became free, my visits became difficult?” the Dalai Lama said.

Some 1.3 million followers of the Dalai Lama live in Russia, mainly in the republics of Kalmykia, Buryatia and Tuva. But Russia enjoys improved political and economic ties with China, which would most likely object to visits by the Tibetan spiritual leader, RIA Novosti said.

China occupied Tibet in 1950 and claims the region has been part of its territory for centuries. No state has recognised the Tibetan government-in-exile.

The Dalai Lama declined to comment on the anti-Kremlin performance of the Pussy Riot all-female punk band inside Christ the Savior Cathedral, Russia’s main Orthodox cathedral, in February.

“If you really want me to comment, let me come to Moscow and spend some time to carry a detailed study of the reality. Then I will make comment,” he said.

The Dalai Lama, who fled Tibet in 1959, has repeatedly said he seeks autonomy for Tibet rather than independence from China. Beijing accuses him of orchestrating the March 2008 unrest in Tibet that left 19 people dead and 623 injured.