Rekong Peo (HP): It may hit you like a hard drink, but women brigades in the interiors of Himachal Pradesh’s Kinnaur district are busy propagating its consumption. They would rather like the menfolk had home-made stuff than ‘English’ liquor. 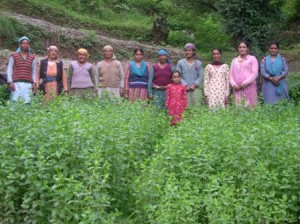 For them home-made liquor is the best drink which helps retain age-old tradition, besides curbing ‘outside influence’.

While the former is made from distinctively flavoured black grapes grown in high altitudes, the latter is made from locally grown apples and apricots.

“Since ages, the locals have perfected the art of brewing liquor — whether from vegetables, fruit, jaggery or grains. Offering liquor is even an important part of local customs and religious rituals. Once people stop brewing, it will, of course, be an end to traditions that have been followed for generations,” said Manjari, chairperson of the women’s rights group, Mahila Kalyan Parishad.

The parishad, which has the support of over 150 mahila mandals, is motivating people here to go off ‘English’ liquor, as it would drown them in debt.

“Serving branded liquor is now more a status symbol. Even those who can’t afford it are serving it and incurring debts. When you have a conventional drink with medicinal value, where is the need to go for a chemically-laced one?” Manjari said.

According to her, if ‘angoori’ is served at a function, youth will hesitate to accept it openly in front of the elders.

“But for the liquor available at vends, anybody can go and buy it. It has spoiled our tribal youth,” said Manjari, an apple grower from the picturesque Ribba village, some 250 km from state capital Shimla.

The parishad has succeeded in banning branded liquor in social functions in some villages like Lippa, Kalpa, Kanam and Sangla, but the drive has still to gain momentum across the district.

Interestingly, the gram panchayats of Nichar and Giabong have already imposed a total ban on consuming and serving ‘English’ liquor.

“Only locally made drink is available here. Acting on complaints, the panchayat last year passed a resolution imposing a fine of Rs.5,000 if somebody violates the resolution,” a Nichar resident said.

The parishad has launched only awareness drives so that people voluntarily give up foreign liquor.

“After carrying out sensitisation drives in all the 77 villages (in the district), we will ask the remaining gram sabhas to start imposing self-regulations like Nichar and Giabong to check its sale and usage,” Manjari said.

Officials of the state excise department say residents of Kinnaur, Lahaul and Spiti districts, Bharmour and Pangi in Chamba district and some pockets in Sirmaur and Shimla districts are allowed to brew their liquor for personal consumption, not for sale. But they can barter it.

Most of these areas, which remain cut off from the rest of the country for more than six months a year owing to heavy snowfall, are known for the rich tribal culture and traditions.