Shimla: BJP lost out to a resurgent Congress in Himachal with Chief Minister Prem Kumar Dhumal conceding defeat as results ended with Congress triumphant on 36 seats and the outgoing party reduced from a majority of 43 seats to 26 in a house of 68 legislators.

“I was entrusted with the task of strengthening Congress in the state, the question of picking the Chief Minister lies with party president Sonia Gandhi,” said a beaming Virbhadra Singh, who is a front runner for heading the state and was made state party president just ahead of the elections.

I humbly accept the verdict of the people,” said the Prem Kumar Dhumal, the outgoing chief minister.

Of the 10 ministers in the Dhumal cabinet, four – Ramesh Dhwala, Kishan Kapoor, Narinder Bragta and Khimmi Ram, lost the elections.

The saffron party suffered major loses in Kangra district where it was only able to win 3 of the 15 seats.

Despite national vice-president Shanta Kumar’s presence in the district, most of his candidates lost the elections. The two ministers from the district who won – Ravinder Ravi and Sarveen Chaudhary belonged to Dhumal camp.

Congress won 10 seats in the district and two went to independents. One of the reasons for BJP losing out in the district is being attributed to the stubborn stance of Shanta Kumar of not carving out smaller districts, something for which were deeply divided and agitated for.

Issues such as setting up of a Central University, controversy over the Vivekanand Trust Memorial hospital in Palampur and squabbling over development funds cost BJP dear.

In may be recalled that Shanta Kumar for most of the five year term was miffed at the working of the Dhumal government and stayed away from attending even the party’s coordinating committee meetings. 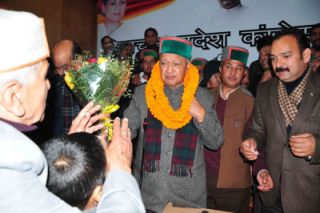 Congress lost out in Sirmaur district but were able to win back some support in Solan and Mandi district. While in the last general assembly BJP had won all five seats in Solan district, Congress by securing a win at Doon and Solan seats got a foot hold in the area.

In Sirmaur, Congress were able to win on one of the five seats, whereas BJP won three and one was secured by an independent, considered a Congress rebel

Neglecting Shimla district cost BJP heavy with cabinet minister Narinder Bragta losing out and only Suresh Bhardwaj holding out in Shimla city seat was the lone winner for the losing party in the district.

In Rohru, a constituency represented by Virbhadra Singh that was wrested by BJP’s Kushi Ram Balnatah in a bye-election, a first time candidate Mohan Lal Brakta of Congress won by over 28,000 votes, a record and the highest winning margin for any seat in the state.

In Kullu district, where all seats were with BJP in the last elections, Congress won on two of them, one went to BJP rebel Maheshwar Singh and BJP were able to win only the newly created Manali seat.

In Chamba district, BJP made gains by winning three of the five seats.

Issues such as price rise, restricting the number of LPG cylinders for domestic consumers or last moment corruption charges leveled against Congress supremo Virbhadra Singh failed to cut ice with the electorate.

On the other hand, the congress charges of land sale in Himachal, mushrooming of private universities and corruption charges against BJP leaders did impact the voter trends.