Chandigarh: The Punjab government Wednesday announced the setting up of a separate force for policing during the night hours amid the ruling Shiromani Akali Dal (SAD) facing fire for its youth leaders being accused of assaulting a senior police officer. 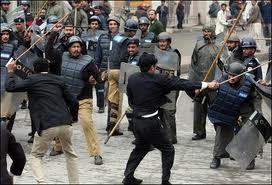 Deputy Chief Minister Sukhbir Singh Badal told media here that Punjab would be the first state in the country to have a dedicated force for night policing. He said the force would be given rest during the day time.

The party has already disowned the three leaders accused of assaulting Assistant Inspector General (AIG) S.S. Mand at a nightclub in Ludhiana Monday. Referring to the assault, Badal said that no one, including Akali Dal leaders, was above the law.

Badal said there would be a separate Superintendent of Police (SP) for each district for night policing.

The need for a separate cadre for night policing was felt as it was getting ignored due to rotational shift of the existing force, he said.

Police will patrol on highways and streets to check the activities of anti-social elements.

The deputy chief minister also said that women were being recruited in the Punjab Police to curb incidents of crime against women.