Dharamsala: After the US, Canada and the European Union (EU), it’s now Britain which has urged China to address policy issues that are pushing Tibetans to commit self-immolation and to engage them in a dialogue to resolve their grievances. 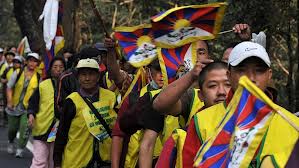 “Foreign Office Minister Hugo Swire has said that the UK has serious concerns about the self-immolations in Tibetan regions,” a statement from the British embassy in Beijing said Tuesday.

Following an EU statement on Tibet, Swire said: “We strongly support the recent statement from Baroness Ashton about the situation in Tibet. We continue to have serious concerns about the human rights situation there, including the self-immolations in Tibetan regions.”

Urging the Chinese authorities to exercise restraint, Swire said: “… I join Baroness Ashton in calling on Tibetans not to resort to extreme forms of protest such as self-immolation, and urge their community and religious leaders to use their influence to stop this tragic loss of life.”

“We strongly support the resumption of meaningful dialogue to resolve the underlying grievances of Tibetan communities.”

“I also urge the Chinese government to ensure unrestricted access to the Tibetan Autonomous Region and other Tibetan areas of China for diplomats, international media and other concerned parties,” Swire said.

“We believe a long-term solution is best achieved through respect for universal principles of human rights and genuine autonomy for Tibet within the framework of the Chinese constitution,” Swire added.

A total of 95 Tibetans have set themselves afire in Tibet since 2009, 82 of them this year, to protest Beijing’s “repressive policies”. They are also demanding the return of the Dalai Lama to his homeland, said the Central Tibetan Administration, which is based here.

The British embassy’s statement on Tibet came a day after the Chinese foreign ministry criticised statements issued by foreign officials on Tibet, and urged those countries to stop interfering in China’s internal affairs.

The Dalai Lama has lived in India since fleeing his homeland in 1959. The Tibetan government-in-exile is based in this Himachal Pradesh hill town.