Anantnag: Locals two days ago had resorted to blocking the Srinagar Jammu National Highway and Protested against district administration, in South Kashmir’s Pazalpora Bijbehara area after a joint team of Revenue department and Municipal committee Bijbehara demolished pillars and incomplete structures of 5 shops raised in the area violating Agricultural Act. 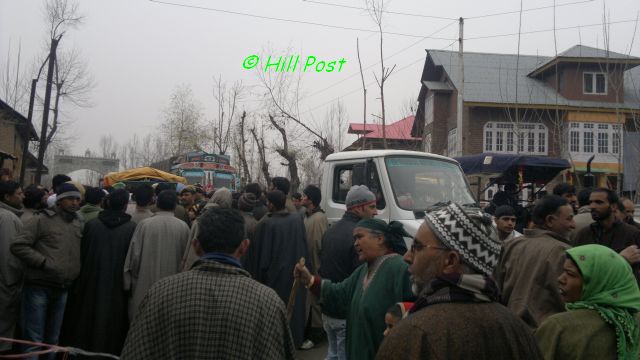 National Highway was blocked by the protesters for about 2 hours after which police intervened and dispersed protesters.

Protesters were demanding same action for other including persons enjoying political patronage, who have constructed colleges, hospitals and other commercial places on the agricultural land near the demolished incomplete structure.

Ab Rashid Lone, brother of Bilal Ahmad Lone whose 5 incomplete structures were demolished during the drive said, “We aren’t protesting against the drive why our structures were demolished but we are protesting against the administration’s double policy. They aren’t taking same action those who have constructed big colleges and hospitals on the same agricultural land.”

“Please see this college and this Zargar Shab’s hospital both were constructed during this year and nobody stopped them by saying that you are violating agricultural act. Please Allah do your justice with we people. My brother has lost everything, he has six children, Bashir Dar duped us.” while weeping Rashid said.

When questioned how Bashir Ahamd Dar duped you he said, “Initially Bashir Dar who is executive officer of Municipal committee Bijbehara, assured us that administration will not take action against us if we bribe him. So a huge amount was given to him and other officials in the administration right from low to high.”

When contacted Naib-e-Taheslidar Bijbehara and asked about the demolition drive, he confirmed it by saying that drive was initiated on the directions of Deputy Commissioner Anantnag.

Deputy Commissioner, Anantnag Farooq Ahamd Shah, when contacted said, “I will not allow anyone to violate the norms, they have violated every rule and norm especially Agricultural Act.”

When asked why didn’t administration dares to take action against persons who have allegedly violated same Act. , he said. “Those haven’t been constructed under my tenure and among them few are sub-judice like Peaks Auto Private limited, but I will not allow any body to violate norms in my tenure.”

Executive Officer, Municipal Committee Bijbehara Bashir Ahmad Dar denied the corruptions allegations and said, “demolished construction is not within the municipal limits so we have nothing to do with it however I have to obey orders of my deputy commissioner that is the reason I was in the demolition drive.”

Photo and report by Saahil Suhail