Chandigarh: One of them is just nine years of age and a few others are 10 to 12, while the the rest are teenagers. But their age is no deterrent to their enthusiasm. These 24 children from Poland – 10 boys and 14 girls – have been offering the people of Chandigarh a glimpse of their culture through performances at different venues.

The group of folk performers, “Cepelia-Poznan”, is not here on a student exchange programme; neither is this an academic trip. The children are here to promote their culture among Punjabis.

In the group are children from kindergarten, primary and secondary schools from Poznan and towns in its neighbourhood in Poland.

Swirling colourful skirts, tapping shoes, traditional Polish hats, with a Polish folk touch – these have attracted large audiences in Chandigarh. Whether the children perform in schools or at the local carnival, as they did recently, they find enthusiastic reception. 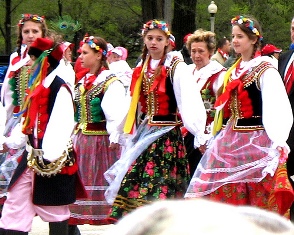 While the children busy themselves promoting Polish culture in Chandigarh, they are also fascinated by the warmth of the Punjabis they have met.

“The culture here is so vibrant. We performed at the Chandigarh Carnival and saw so many things going on at one place,” said 12-year-old Koczorowski Mikolaj.

The children have enjoyed spicy Punjabi food and taken a boat ride on Sukhna Lake. They have gone shopping at the Sector 22 Rehri (hand-cart) market.

And they seem to be enjoying their stay.

Dembski Kacper, 9, the youngest of the group, said: “People are very warm, very friendly.”
Most members of the group drew comparisons between Chandigarh, designed by French architect Le Corbusier, and cities in Europe.

Miczek Weronika, 10, another dancer : “Though the local language is alien to me, I have been enjoying my stay here. With planned roads, aligned trees and parks, this place is so similar to Europe.”

The trip has been arranged by the Chandigarh chapter of the Public Relations Society of India (PRSI) to foster Indo-Polish ties.

Chairman of PRSI’s Chandigarh chapter, Ashutosh Kapila told: “They seem to be enjoying their stay and they are getting an equally enthusiastic response from people here.”

On the occasion of Gurpurab, the birth anniversary of the founder of Sikhism Guru Nanak Dev, Nov 28, the group participated in festivities and had the langar (community meal) at a local gurdwara (Sikh temple).

The local visits and performances are being co-organised by Yuvsatta, a city-based NGO.

Promod Sharma, coordinator of Yuvsatta, told IANS: “These children are strengthening what we talk of as the global village. They are not only conveying their culture, but also learning of Punjabi culture.”

Although this is the first trip to India by many of the children, members of the group have already performed in France, Holland, Germany, Russia, Austria, United Kingdom, Italy and Turkey.

At most of their performances in Chandigarh, the group has been singing that popular old Bollywood song, “Udde jab jab zulfein teri”, from the 1957 movie “Naya Daur”.

“An old Hindi song in Polish accent is the best part of their performance. It is commendable that they have studied a little of our culture to convey their own,” said Kumud Sen, a resident of Chandigarh who has witnessed one of the group’s performances.

“Their performances were mesmerising. I am amazed to see that they have travelled all the way from Poland to showcase their culture. We enjoyed their dance steps,” said Piya, 10, a student of the Carmel Convent School.

“Their dresses were very cute, they sang, they danced and they also played musical instruments, all by themselves. They were very talented and very confident on stage,” said Arnav, 12, another spectator.