London: An American company claims it has developed a technique that can make bread stay mould-free for 60 days, BBC reported Friday.

In normal conditions bread will go mouldy in around 10 days. But US company Microzap said it has developed a technique that will keep bread mould free for two months. 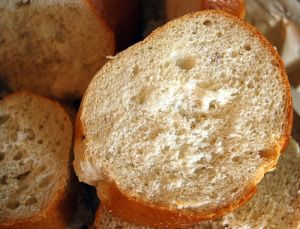 At their laboratory in Texas Tech University in Lubbock, chief executive Don Stull showed off a long, metallic microwave device that resembles an industrial production line.

Originally designed to kill bacteria such as MRSA and salmonella, the researchers discovered it could kill the mould spores in bread in around 10 seconds.

The company claims it could significantly reduce the amount of wasted bread, which in Britain alone amounts to almost a third of all loaves purchased.

The technique can also be used with a wide range of foods including fresh turkey and many fruits and vegetables.

In the US, figures released this year suggest that the average family throws away 40 percent of the food they purchase, which adds up to $165 billion annually.

In Britain, bread is a major culprit, with 32 percent of loaves thrown out as waste when they could be eaten, according to the Department for Environment, Food and Rural Affairs.

One of the biggest threats to bread is mould. As loaves are usually wrapped in plastic, any water in the bread that evaporates from within is trapped and makes the surface moist. This provides excellent growing conditions for Rhizopus stolonifer, the fungus that leads to mould.

The machine the team has built uses much the same technology as found in commercial microwaves – but with some important differences, according to Stull.

“We introduce the microwave frequencies in different ways, through a slotted radiator. We get a basically homogeneous signal density in our chamber – in other words, we don’t get the hot and cold spots you get in your home microwave.”