New Delhi: The Armed Forces Special Powers Act (AFSPA), which gives sweeping powers to the armed forces, has been in force in India’s northeast for the past 54 years and also in Jammu and Kashmir and the media should collectively raise their voices against the draconian law, experts said at a seminar here Saturday. 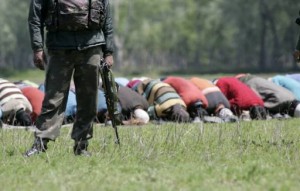 Eminent media persons, including Sanjoy Hazarika, H.K. Dua, Kumar Ketkar and Kuldip Nayar, also said that media persons reporting in conflict zones should be provided insurance. They were speaking at a seminar on “Reporting conflict zones” by the South Asia Media Commission, India Chapter, at the India International Centre.

“Media reporting on AFSPA is only about its imposition in Jammu and Kashmir.. It is forgotten that it is in place in the Northeast for 54 years,” said Hazarika, author, columnist and Director of the Centre for North East Studies at the Jamia Millia Islamia here.

“We cannot have an act for 54 years, 65 years after our Independence.. This constitutes discrimination and it is placed in the bedrock of law.. We have to raise our voices against it,” said Hazarika.

According to Dua, senior journalist and Rajya Sabha member, in areas where the AFSPA is in force “The army is deciding the policy and not the government.”

“We have to do more reporting from such areas,” said Dua, adding that media should also guard against biases playing up in their reporting. “Truth should not be sacrificed even if one has to pay with personal safety,” he said and emphasized that insurance cover should be there for media persons reporting from conflict zones.

According to veteran journalist Kumar Ketkar, there should be demilitarization of the northeast and Jammu and Kashmir as the reportage from there “is biased, giving a feel of normalcy” which in turn makes the government not consider lifting AFSPA.

Ketkar said media reportage of issues in conflict zones is marked by “cluelessness”. “The reader today has no clue on what it happening.. The TV channels scream out the news without any objectivity….The same is true of the print media,” said Ketkar.

He said the South Asia Free Media Association (SAFMA) should create journalist cells who would visit conflict zones. “The journalists should be chosen, according to merit, and sent to bring out the truth,” said Ketkar, adding that journalists should not be victimized for their reportage.

“We should only be embedded to truth and to SAFMA, and to nothing else,” said Ketkar.

Nayar said he does not foresee the possibility of the Kashmir issue being solved for many years. “The government is ham handed in its approach, the right to say is not really respected,” said the veteran journalist.

“The army does not want reporting of human rights violations and the government does not want it too,” sid Dua, adding that in such a situation it is difficult for journalists to report from Kashmir. “There is alienation.”

According to Kashmiri journalist Shujaat Bukhari, while the government says the situation in Jammu and Kashmir has normalized it has stopped giving DAVP ads to three Kashmiri newspapers. He said the government’s move was tantamount to “demolishing the institution of freedom of expression… Is this normalcy?”