New Delhi: The Supreme Court today issued notice to the central government on a plea for direction that it refer to the International Court of Justice (ICJ) the torture of the Indian Army’s Capt. Saurabh Kalia by the Pakistan Army.

Capt. Kalia was captured by the Pakistan Army in 1999, during the Kargil war. 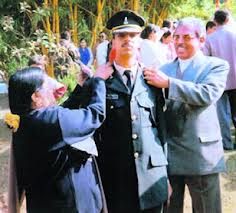 An apex court bench of Justice R.M. Lodha and Justice Anil R. Dave issued notice after counsel Arvind Kumar Sharma told the court that the victim’s family approached the defence ministry seeking that the matter be referred to the ICJ as Kalia’s treatment, after being captured, violated the international convention on the treatment of prisoners of war.

The petition has been moved by Capt. Saurabh Kalia’s father N.K. Kalia.

The Pakistani side had handed over to India a badly tortured and mutilated body of Capt. Saurav Kalia.

The court initially had reservations in entertaining the petition by the martyr’s father on account of the scope of its jurisdiction to pass orders on an issue that involves two sovereign countries.

In a poser, the court asked: “Can a court issue a mandamus in a matter like this is a question.”

It added: “They (ICJ) are created by treaties where both states’ (countries) consent is required.”

“We know the facts of the case. But can court ask Union of India to take the matter to ICJ? We tag this matter with another matter as it involves the question of very wide reification internationally.”

Observing that there was “no problem if direction was needed (on an issue) within the country”, the court said: “Before any order is passed by this court there should be an absolute clarity that we have the jurisdiction.”

Underlining that “being the highest court we have to pass order within the four corners of the constitution”, the court said: “We need to first pass this hurdle as to the extent to which we can pass order. We do feel it requires some serious determination of the question of law.”

Having pointed to the dilemma that it is placed in, the court said: “We share the pain of the father. (But) We have our own discipline and the system. We can’t go beyond what law permits us to do.”

At this, the court was told that Capt. Saurabh Kalia’s family has made every effort to seek justice. They had requested the defence ministry, which in turn said that the matter has been referred to the Prime Minister’s Office. The PMO then said it was under the consideration of the external affairs ministry.

The court gave the central government 10 weeks to respond to the petition.

Capt. Kalia of the 4 Jat Regiment was the first Indian Army officer to observe and report large-scale intrusion by the Pakistani Army into the Indian side of the Line of Control in the Kargil sector of Jammu and Kashmir.

Kalia and five soldiers were captured May 15, 1999, and were in captivity of Pakistani Army for over 22 days.

The bodies were handed over to Indian authorities June 9, 1999.

The autopsy report of the captain and the five soldiers revealed extreme torture. There were marks of burns with cigarettes, the ear drums had been pierced with hot rods, and limbs and private organs chopped off, and then the soldiers were shot dead.

India and Pakistan fought a brief but bitter war in the icy heights of Kargil in May-July 1999, and India took back all the positions that had been occupied by the Pakistani Army.

India lost 527 soldiers and Pakistan upwards of 700 men in that conflict.