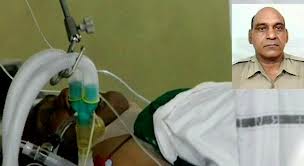 Subhash Tomar’s condition deteriorated during the night and he passed away at 6.30 a.m. at Ram Manohar Lohia Hospital, Delhi Police spokesman Rajan Bhagat said. The body has been sent for post-mortem, he said.

Tomar was reportedly beaten up and trampled upon by protesters after he fell down at Tilak Marg during the protests.

According to doctors, his condition was critical and he was on ventilator.

Eight people, including an Aam Aadmi Party activist, were Sunday night arrested for the attack on Tomar but were granted bail the next day, Joint Commissioner of Police Taz Hasan said.

He said that after Tomar’s death, Section 302 (murder) would be added to the case.