New Delhi: A concept of Asia as one entity, linked by road, rail and sea, is taking shape and India is contributing towards it by undertaking to build highways and bridges in neighbouring Myanmar. 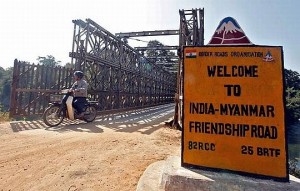 India has offered to build 71 new bridges in Myanmar on the Tamu to Kalewa highway, said Foreign Secretary Ranjan Mathai, and added that a team from the road transport and highways ministry is visiting that country as part of the project.

Speaking at premiere of the film “Highway to the Asian Century” by Suhas Borker at the India International Centre Friday evening, Mathai said India is also helping construct the Kalewa-Yargi road in Myanmar.

The film screening comes ahead of the Dec 20-21 Asean-India Commemorative Summit being held in New Delhi to mark 20 years of India’s relations with the 10-member ASEAN.

“Asian countries are forging closer bonds, through road, rail and sea highway…India is the link between east, south and central Asia,” said Mathai, who was the chief guest.

India is also constructing part of the Trilateral Highway, meant to link it with Thailand through Myanmar, he said.

The connectivity building should also be looked at as a “highway of mind and spirit”, said Mathai.

“Connectivity is the factor that helps in economic development,” said United Nations Resident Coordinator Lise Grande, and added that the UN body ESCAP (Economic and Social Commission for Asia and the Pacific) is “committed to” help build it.

The 52-minute film focuses on “intensification of India’s relations with the ASEAN and the vision of an Asian economic community”.