Pragmatic politicians in a democracy would always want to reach out and touch people as and when they get a chance because the real interaction with the people, the real connect with the people, mostly happens during election campaigns only. Because once they are elected, public access to their corridors of power is immediately restricted by officials who surround the leaders. So the political wisdom says that they should seize upon any chance they get to interact with huge crowds in order to reach out and touch them before their next election.

But top political leaders in India, unfortunately, missed that chance, or may be deliberately avoided the chance. 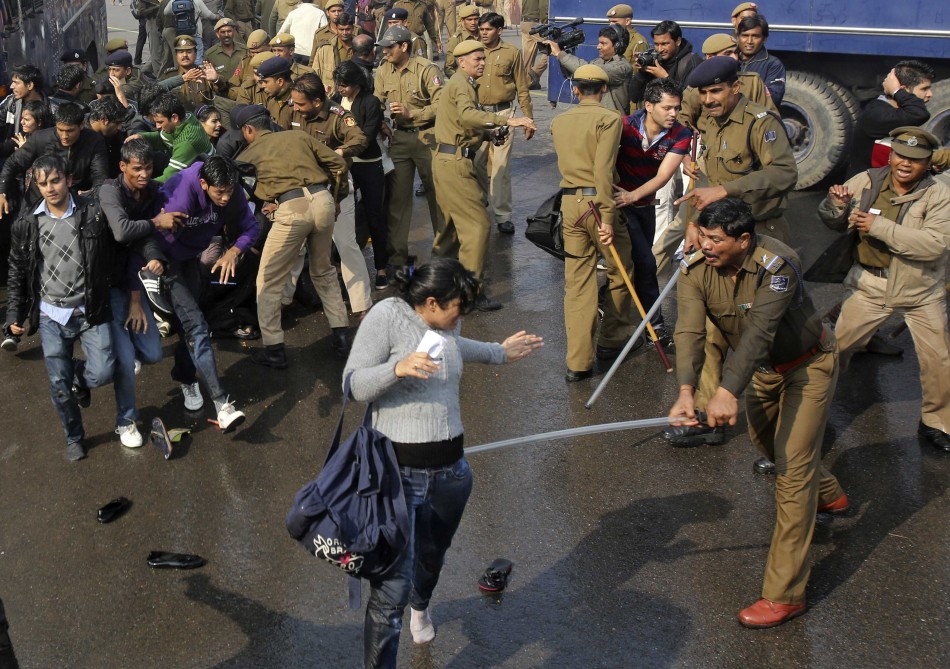 They missed the opportunity when after a brutal gang rape of a 23-old trainee physiotherapist, concerned Indians poured on to the streets of New Delhi and several other major cities to express their outrage over the rape, the police indifference towards security of women and the slowness of the justice system of the country. This was a genuine and spontaneous outcry.
They were looking for some kind of assurance from the top leaders of the government that the culprits will not be spared.

But instead of assurances what they got was a senseless effort by the police to disperse the peaceful crowds, using archaic canes and water cannons and blocking roads and closing metro stations around India Gate, the venue of their protest rallies. Instead of government leaders talking to them and assuring them about bringing the culprits to justice, it was police beating up innocent young girls and boys holding a peaceful rally with batons and water cannons.

When the demonstrations continued every day and the scene got real ugly on the seventh day after the rape, Prime Minister Manmohan Singh came on TV to tell the crowds to stay calm and that the government plans to look into the issue of women’s safety by appointing a committee — a well known tactic of buying time to deal with the issue. Sometimes it seems the slow reflexes in India in dealing with the issues stem from the old age of its leaders. Most of them are above 70 years in age.

Whatever the reason may be, because of the episode it became very clear that the Congress party leaders have no desire of any direct interaction with the people, except during the election campaigns. No one can say if it is indifference or a political miscalculation or just a wrong advice by some novice advisers. When the prime minister used TV to make a statement, it was the eighth day and thousands of young people (future voters) had been pouring on to the streets for seven days with the hope of some kind of an assurance.

There were several accounts of the meaningless police action to disperse the peaceful demonstrations. It was meaningless because India is a democracy, is not under any state of emergency, and every Indian has a right to peaceful demonstration. Here is an account of a concerned citizen who went to the India Gate rally just to support the demonstrators and the rape victim. This is what he (Sanjeev Sood) wrote on Facebook:

“………………………………..WE WERE SIMPLY TALKING. I had just finished my packet of biscuits when the police, hundreds of them from DELHI POLICE and RAF (Rapid Action Force), charged at us from behind, WITHOUT ANY WARNING.

“They first attacked the men from behind. I stood up to see what the commotion was about, and immediately fell as most girls didn’t get enough time to stand up. I hugged Smitaji as we fell on each other and there was a stampede over us. Some of the men from the circle ran for their lives, but most of them ran towards us and hugged us and fell on us and took the initial blows of the LATHI CHARGE.

“I couldn’t see anything. I just heard the two cracks of a SPLIT BAMBOO STICK on my back, butt and thighs. Then I heard the police screaming, HARAMZADIYO, RANDIYO, and then I saw a boot kicking my knees and shin. They hit Smitaji on her lower-back and spine. The boys of ASMITA, and some more men pulled us all up and all of them formed protection girdles around the girls to push us out of the range of the water cannons and charging men in KHAKI AND BLUE.

“Agreed that in such gatherings, some nasty elements do infiltrate and create a raucous, but the police didn’t seem to have the basic sensibility to differentiate between hooligans and some young girls, children, and elderly people. If Delhi Police and RAF lack the basic cognizance to recognize the good from bad, what protection can we expect from them?
Instead I thank the men of Delhi, the boys of Delhi, who helped all the girls to escape from the wrath of THE POLICE…………………”

But the senseless actions by police did not end there. They alleged that one of their colleagues died because of the injuries he suffered while “managing” the crowds. The word should have been “manhandling”. But eyewitnesses said the policeman just fell down while chasing the crowds and apparently had a heart attack. The post mortem report confirmed the heart attack but also said he had some broken ribs and abrasions on his chest, which some doctors said could have happened when the untrained laymen were trying to revive him by pumping his chest etc. The report also said he was hurt by a blunt force, which could be, repeat, could be the impact of his fall on the asphalt.

But the whole thing could have been dealt with some political practicality.
The prime minister should have come on television within one or two days after the episode, (if not within hours like US President Barack Obama did after the Connecticut school shooting) to promise a full and rapid investigation and full punishment under the law. But if that did not pacify the people, another leader could have come on TV to make a soothing statement.

One just wonders why Congress party chief Sonia Gandhi didn’t send Rahul Gandhi, who is being groomed to be the country’s prime minister and who can easily attract the youth vote, to address the young crowds on the second or the third day after the episode and let him try to reach out to them, especially in view of the fact that his main agenda in the Congress is to get India’s youth to enter politics. He could have addressed them at a rally, or on TV, assuring them that he will use all his influence in the party and the government to get the stiffest punishment possible under the law for the alleged rapists. There was no risk because a stiff punishment had become a surety already. This could have been a much better training for Rahul, as compared to the election campaign speeches he made in Gujarat and Uttar Pradesh.