Shimla: Down to the last vote count, the much awaited results for the Himachal assembly elections is poised to be cliffhanger that has many candidates already miss a beat or two as majority of exit polls predict a close race for BJP and Congress which could end up as a hung assembly.

Posturing by both parties of coming out winners notwithstanding, chief election officer Narinder Chauhan today stated that the poll had so far recorded 74.63 percent voting, which was the highest the state ever has had. 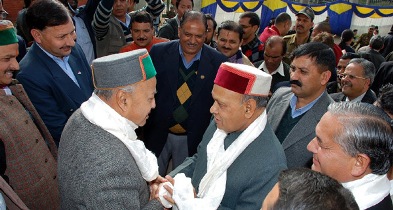 The polling percentage had inched upwards after taking into account the additional 33,000 voters who had used postal ballots to participate in the election.

“The percentage could marginally rise further as those postal votes arriving till evening of 19th December would be taken in count,” said Chauhan.

Counting would begin at 8 a.m. on 20th December, and the electronic voting machines would only be opened after all the postal votes have been counted.

Simultaneous counting would start in 68 halls selected all over the state and electronic engineers from BHEL had been requisitioned for these centers, who would be pressed into service should an EVM fail to function.

“These engineers have tools to retrieve data from dysfunctional EVMs,” said Chauhan.

An exit poll by C-Voter put the Congress seats in a house of 68 between 30 to 38 and gave the ruling BJP a fair chance of winning with 27 to 35 seats.

An post poll survey by television network CNN-IBN held out that either party could win between 29 to 35 seats and yet another exit poll by News 24 – Today’s Chanakya gave it Congress that could win 40 seats, give or take 7 seats while BJP would be contained at 23 seats, plus or minus 7 seats.

Sensing a win, Congress leaders have started lobbying for the chief minister’s position with Virbhadra Singh be considered the front runner in the party.

Others in the fray are Vidya Stokes, Kaul Singh, GS Bali and even union minister Anand Sharma is being counted as a potential candidate even though he has shown reluctance to enter state politics.

On the other hand BJP has already endorsed the candidature of Prem Kumar Dhumal for chief minister but should the party fall short of a majority; post result arithmetic could change the leadership issue in the ruling party dramatically.

Polling for the general assembly election was held on November 4.