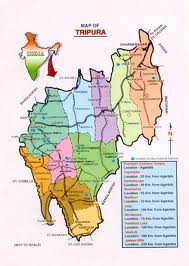 An Election Commission of India (ECI) official told  here that assembly elections are due to be held in February in three northeastern states — Meghalaya, Tripura and Nagaland. The respective assemblies would be constituted anew before the expiry of their terms.

The state assemblies in Meghalaya, Tripura and Nagaland have 60 seats each, and the terms of the assemblies of these states expire March 10, March 16 and March 26, respectively.

Tripura Chief Electoral Officer Ashutosh Jindal told reporters: “The full ECI would visit Tripura on Jan 4 or 5 to study election preparations in the state. They would meet political parties, top police and civil officials and media.”

The ECI has also decided to send eight officials to Tripura following the Congress’s complaint about discrepancies in the voters’ lists.

Tripura Congress president Sudip Roy Barman and party legislator Subal Bhowmik met the ECI in New Delhi on Dec 21 and submitted thousands of complaints about the fake and ineligible names enrolled in the voters list.

The ECI had earlier sent four observers after rescheduling the ongoing revision of electoral rolls in Tripura following the Congress’s complaint about irregularity in the voters’ lists.

The ruling Communist Party of India Marxist (CPI-M) in Tripura condemned the Congress move, and alleged that the opposition party was delaying the process of revising electoral rolls and trying to promulgate president’s rule in the state.

Criticising the change of schedule for the revision of the rolls, the CPI-M alleged that the Congress was conspiring to dislodge the Left Front government in Tripura, as it did in 1988.

“The Congress becomes frightened to face the assembly elections as it would suffer a humiliating defeat in the ensuing assembly polls in Tripura. That’s why the party wants to come to power through the back door as it did in 1988,” CPI-M state secretary Bijon Dhar told reporters.

“The CPI-M with the help of a section of officers has included huge fake names in the voters’ lists to get electoral mileage in the next assembly polls. Even names of Bangladeshi citizens were incorporated in the voters’ lists,” Barman told reporters.

Chief Electoral Officer Jindal said that over 1,20,300 people, including 80,000 fresh voters, have applied for their names to be included in the electoral rolls.

“Now the final publication of the electoral rolls will be made Jan 12 next year instead of the previously announced date of Jan 5 (2013),” the CEO said.