New Delhi: Congress’s de facto number two Rahul Gandhi will lead the party’s campaign in the 2014 general elections while his mother and party chief Sonia Gandhi will be the supreme leader, the party announced Monday. 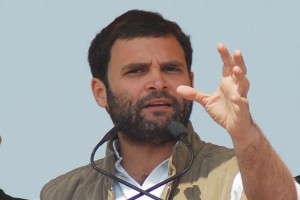 Rahul Gandhi, who heads the party’s poll coordination panel, is also to be given a bigger responsibility in the party ahead of the ‘chintan shivir’ and the AICC session Jan 18-20 at Jaipur, said party sources.

Change in Rahul Gandhi’s role may come about during the long-pending organisational reshuffle which could be effected after Dec 20, Congress sources said.

“He has been heading the party’s youth wing… there has been an overwhelming demand from the party workers that he take a bigger role. He has agreed to it,” said Chacko.

Party sources said that Rahul Gandhi’s ascension is a natural process as the Congress is witnessing a generational change in leadership.

Having formalised the United Progressive Alliance and won power in 2004 and retained it in 2009, the Congress leaders said they were confident of UPA III coming to power in 2014.

Realising the need for coalition politics, Congress sources said the party would firm up its strategy to have both pre-poll and post-poll alliances for the next Lok Sabha election.

Defence Minister A.K. Antony heads the panel to finalise the alliances ahead of the 2014 Lok Sabha polls.

In the 2009 general elections, the Congress had gone as UPA nationally but had a different strategy at the state level.

The party first opened up to the idea of coalition politics at its 2003 ‘chitan shivir’ in Shimla.