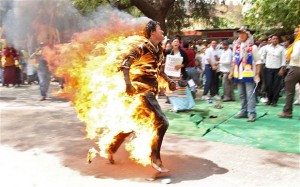 Total 92 such cases have taken place since 2009 and over 20 cases took place in November this year.

Lobsang Gendun, 29, set himself on fire in Golog Pema Dzong Monday. He died on the spot.

The self-immolators, claimed the government-in-exile, have called for the return of Tibetan spiritual leader the Dalai Lama to Tibet and freedom for Tibetans.

The Dalai Lama along with his followers has lived in India since fleeing his homeland in 1959.

The Tibetan administration in exile is based in this northern Indian hill town.