Kinnaur: They twice kept their panchayats unrepresented. This time around, the attempt is not to vote but to get their members unanimously elected. 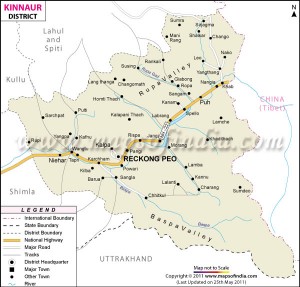 They are residents of four tiny villages in Himachal Pradesh’s Kinnaur district who boycotted the democratic process at the grassroots level over inadequate compensation for their crop loss and the compromising of their traditional water and forest rights. The villagers of Urni, Yula, Chagaon and Miru in Nichar sub-division have decided to participate in the panchayati raj elections slated for Dec 23.

The villagers, mainly the tribals, boycotted the elections in December 2010 and by-elections in November 2011, saying the 1,000 MW Karcham Wangtoo Hydroelectric Project of infrastructure major Jaiprakash Associates Ltd. has affected their livelihood and damaged the local ecology.

“This time we have decided to participate in the panchayat elections and get our representatives elected,” Karcham Wangtoo Sangharsh Samiti president Vinay Negi told IANS.

He said the project-hit villagers have started getting their dues.

The samiti had mobilised the villagers against voting in the 22 wards of the four panchayats till the compensation was settled.

“We are convincing the locals not to go for voting and to have a unanimously elected panchayat,” Negi added.

The four panchayats have 3,326 voters.

Varsha Negi of Urni village told IANS: “We got compensation of Rs.75,000 for the loss of our forest rights. The compensation for damage to the crop is in the process with the government.”

Another villager, Thakur Singh, said: “We are still to get adequate financial relief for the cracks that have surfaced in most of the houses due to indiscriminate use of explosives for tunnel construction by the project authorities.”

“After getting members elected to the panchayat, we will strongly put forth our demands,” he added.

The residents say more than a dozen villages in the vicinity of the hydropower project face a water shortage as most of the traditional sources have dried up due to massive construction.

Election officials said on the past two occasions, nobody had turned up to file their nomination papers for any post of the four panchayats and two panchayat samitis.

The hills of Himachal Pradesh are alive with the sounds of villagers voicing their protest against the numerous hydropower projects that they say will further compromise their water and forest rights.

The upcoming projects will not only damage natural resources and affect livelihoods but also use up a considerable chunk of forest and agricultural land, the villagers and green activists contend.

According to forest department estimates, over 9,000 hectares of forest land has so far been diverted to non-forest use. Of this, 7,000 hectares is earmarked for hydropower projects alone.