New Delhi: A 16th century historical work tells of an Afghan army which went out of Ayodhya – which was controlled by local chiefs – on an expedition. Upon its return, two groups of people awaited to welcome it at the gate of the city – Muslim clerics to offer benediction and Hindu women holding pitchers.

The Afghan soldiers first went to the women and then to the clergy, runs a line from a historical account of Ayodhya. 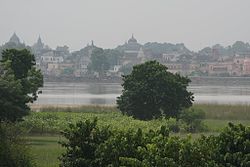 On Dec 6, 1992, the Babri Masjid was torn down by frenzied karsevaks who argued that the mosque was built on a temple of Lord Rama. Ayodhya, the mythical capital of Lord Rama in the epic Ramayana, was never the same again.

The act changed the politics of the nation that continued to fester on communal hate for at least a decade.

A new publication by the Safdar Hashmi Memorial Trust, “Hum Sab Ayodhya” released Dec 6 to coincide with 20th anniversary of the Babri Masjid demolition revisits a historic travelling exhibition of the same name (Hum Sab Ayodhya) mounted by the trust to protest the carnage.

The exhibition was attacked by Bajrang Dal at Faizabad in 1993.

The book, collated from the archives of SAHMAT that documents Ayodhya in a chronological order, walks the reader through the socio-cultural history of the town in the context of its strategic geographical terrain as the confluence of the Sarayu and Ghagra rivers with photographs, reproductions of plates and texts in panels.

The exhibition comments on the anachronistic nature of the violence in the city – secular exposure to diverse influences beginning with Buddhism and Hinduism to Islamic influence in the middle era.

The exhibition was historic because of the controversy it courted – both in Uttar Pradesh and in the national capital.

“They attacked us because of a text on the Ram Katha, a Buddhist interpretation of the tale of Lord Rama from the Dashrathi Jataka. In the Buddhist version, there is no Ravana and no kidnapping of Sita. Rama and Sita are brothers and sister. What the Bajrang Dal accused us was of blasphemy,” Ram Rahman, a senior functionary of the SAHMAT, recalled.

The exhibition later earned the wrath of the government when it came to the capital – despite the fact “everything was compiled from historical text”.

“On the orders of the lieutenant governor of Delhi, the police removed the Ram Katha panel from the exhibition. For eight years, we could not show it in India till lawyer Rajiv Dhavan won a suit with a strong judgment in favour of the panel,” Rahman said.

Releasing the book, social activist Aruna Roy, the founder of the Mazdoor Kisan Shakti Sangathana, said “nobody thought that the mosque will be brought down”.

“After that, history took a new turn. One of my worst days as the citizen of India was the day when the mosque was brought down. It was an assault on reasonable people like me who hold independence dear,” Roy said.

Prabhat Patnaik, Marxist economist and political commentator, said the notion of a pan-Indian identity was in crisis.

“We should be committed to an India as a fraternity of equals. Where does this event 20 years ago fit in? It was a milestone in the counter-revolution, the fact you do so and get away with it,” Patnaik said.

On a more introspective note, former chief justice of India J.S. Verma, who had ruled in Aryodhya cases, summed up: “We have just enough religion to make us hate, but not enough to make us love.”