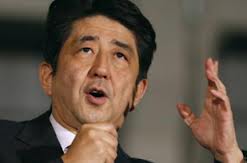 Abe, who held the post from 2006 to 2007, will immediately unveil his new cabinet, reported Xinhua.

The LDP and its coalition partner hold 325 seats in the more powerful lower house after winning a landslide victory in the Dec 16 election.

In the first round of election in the upper house, Abe failed to gain more than half of votes in the 242-seat chamber, but it will not obstruct Abe from becoming Japan’s new prime minister.