Lima (Peru): A total of 472 vehicles will compete in the 2013 Dakar Rally, the rugged road race being hosted for the fifth consecutive year in South America. 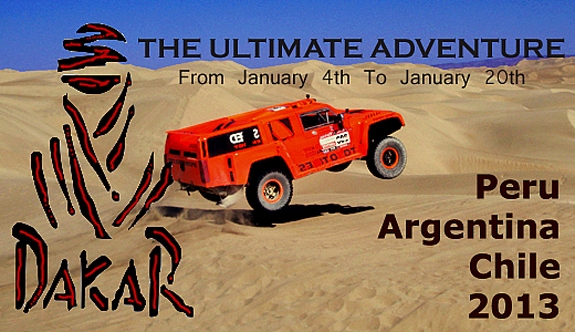 The race, watched by more than a billion people in 197 countries, will begin in Peru’s capital Lima Jan 5 and end in Chile’s capital Santiago Jan 20, after crossing through Argentina, Xinhua reported Tuesday.

At the official presentation of the competition here, the Dakar Rally’s French-born director, Etienne Lavigne, highlighted the obstacles the participants will face as they race across different landscapes, from parched deserts to elevated zones amid extreme weather.

Peruvian External Trade and Tourism Minister Jose Silva told reporters: “Peru is prepared to offer the 2013 Dakar Rally and the world a historic event that will contribute to consolidating the country as an international tourism destination.”

Silva said that around 2,500 people will be involved in the competition, and hundreds of tourists are expected to arrive in Peru for the event, generating revenue of at least $500 million.

Organisers said the race will feature 196 motorcycles, 40 four-wheel-drive vehicles, 161 cars and 75 trucks from 50 different countries, racing across 5,711 km in 14 stages over 21 days, including one rest day.

After leaving Lima, the competitors race through the southern Peruvian regions of Ica, Arequipa, Moquegua and Tacna. They then cross into Chile on the sixth day and on the eighth day enter the Argentinean province of San Miguel de Tucuman. On Day 17, they return to Chile, where they cross the finish line Jan 20.

The Dakar Rally was originally held between Paris (France) and Dakar (Senegal), but political turmoil in Africa led organisers to relocate the race to South America, where it has taken place since 2009.