Beijing: Archaeologists have excavated about 3,500 kg of ancient coins in China’s Inner Mongolia Region, Xinhua reported today. Most of these coins were in prevalence during the Han Dynasty (202 BC – 220 AD). 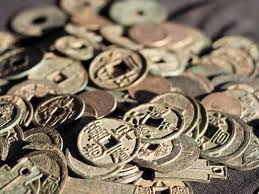 According to Lian Jilin, a researcher with the regional Institute of Cultural Relics and Archaeology, the coins were found in three millennia-old coin pits in the ancient town of Huoluochaideng after police cracked three theft cases.

Archaeologists also excavated over 100 casting moulds from the relics of a coin workshop. The moulds are believed to date back to the rule of Emperor Wudi (156 BC – 87 BC) of the Western Han Dynasty and the short-lived Xin Dynasty (45 BC – 23 AD) founded by Wang Mang.

Based on its size and cultural relics uncovered there, Huoluochaideng town is believed to have been a major town in northern China during the Han Dynasty, said Lian.

The findings are significant in the study of the ancient monetary system and casting technology, he added.