Dehradun : ‘Shaheedon ki chitaon par lagenga har varsh mele; vatan par marne walon ka yahi antim nishan hoga’….Are lines said in almost every meetings held in tribute to our martyrs and men who sacrificed their lives for the sake of the country. But in Uttarakhand’s capital, the memorials created in memory of the Kargil martyrs are in a sad state of neglect. 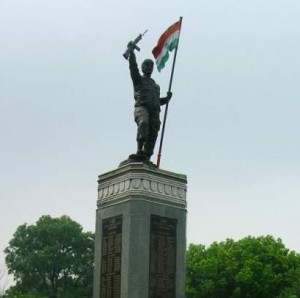 Almost all of these memorials erected with much fanfare and inaugurated by important politicians are today in dire straits. The plaque reading the name of the soldier in whose honour the memorial has been made and listing his act of valour are today covered with posters of various political parties and messages.

The walls on which the stone has been placed are falling down and forget a paint job, even the bricks that have started giving way have not been replaced or repaired. No government department claims it has the responsibility of looking after them and the Nagar Nigam just washes its hands off them, saying that it has no funds to look after or maintain them.

Normally the memorials are raised in the vicinity or locality to which the martyr belonged to in the hope that the people of the locality may look after the memorials, as  respect to the person of their locality, but this has also not happened.

Hill Post talked to a mother of one such martyr, and she admitted that she was saddened at the neglect of the memorial in the memory of her son.

“Till I had the strength, I would go and clean the place up, but now in the twilight years it is not possible for me to do it any more, and from the little pension money that I get, it is hard to meet family expenses leave aside to maintain the memorial”, she said.

However, Uma Thapliyal, a senior journalist of Uttarakhand was of the view that the state government should set up a separate department to look after the war memorials in the state.

“Uttarakhand has the largest number of its youth in the armed forces and many of them have died and sacrificed their lives for the nation. Memorials have been built to them and as a tribute to their valour the government should at least have the understanding to spend some money for the upkeep of these memorials”, said Thapliyal.