Washington: Indian-American astronaut Sunita Williams has returned to earth after 127 days in space with a new record under her belt – the most spacewalking time by a female at 50 hours and 40 minutes over seven career excursions.

Williams, who was commander of Expedition 33 on the International Space Station returned home with two space-going colleagues aboard a Russian Soyuz capsule that landed at 8:56 p.m. Sunday night northeast of Arkalyk in the steppes of Kazakhstan, according to US space agency NASA. 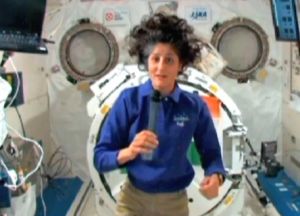 Williams has logged 322 days during two space flights making her second on the list of most experienced US female astronauts. She also holds the record of longest spaceflight (195 days) for female space travellers.

Daughter of an Indian-American father from Gujarat and a Slovenian mother, Williams is the second woman of Indian origin to have been selected by NASA for a space mission after Kalpana Chawla and the second astronaut of Slovenian heritage after Ronald M. Sega.

Williams, Aki Hoshide of the Japanese Aerospace Exploration Agency and Russian cosmonaut Yuri Malenchenko spent 125 of their 127 days in space circling Earth onboard the ISS. The trio blasted off from the Baikonur Cosmodrome in Kazakhstan on July 15.

Kevin Ford, the new ISS commander and his crewmates-Russian cosmonauts Oleg Novitskiy and Evgeny Tarelkin-will run the outpost as they await the arrival of three more crew members, including American Tom Marshburn, in December