Economic ministers of the 10-nation Asean bloc are meeting in Guwahati in December as part of India’s push to increase connectivity with the northeast and the regional grouping with which its trade stands at $75 billion, Commerce and Industry Minister Anand Sharma said Sunday.
Sharma informed journalists accompanying Prime Minister Manmohan Singh for the 10th Asean-India Summit Nov 18-20 and the 7th East Asia Summit in Phnom Penh that India and the Asean have a “robust engagement”. 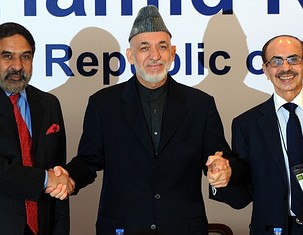 The meeting of economic ministers in Guwahati is aimed to “release the robust potential of northeast India, and integrating it with the vibrant economic region of the Asean”.

The meeting is the first such between Asean ministers. The link between northeast India and the Asean will help to expand connectivity and provide access to ports and trading through sea routes, Sharma said.A trilateral highway to link India with Myanmar and Thailand is also being laid out.
India has signed a Free Trade Agreement (FTA) with Asean on goods, while it is in the “final stages of concluding a FTA on investments and services”, he added.

The two-way trade between India and Asean is $75 billion, with $40 billion from Asean and $35 billion from India, Sharma said.