The major focus of the conference was to promote peace and development in the region. It also focused on collective youth collaboration programs across the International Borders to spread the message of peace. 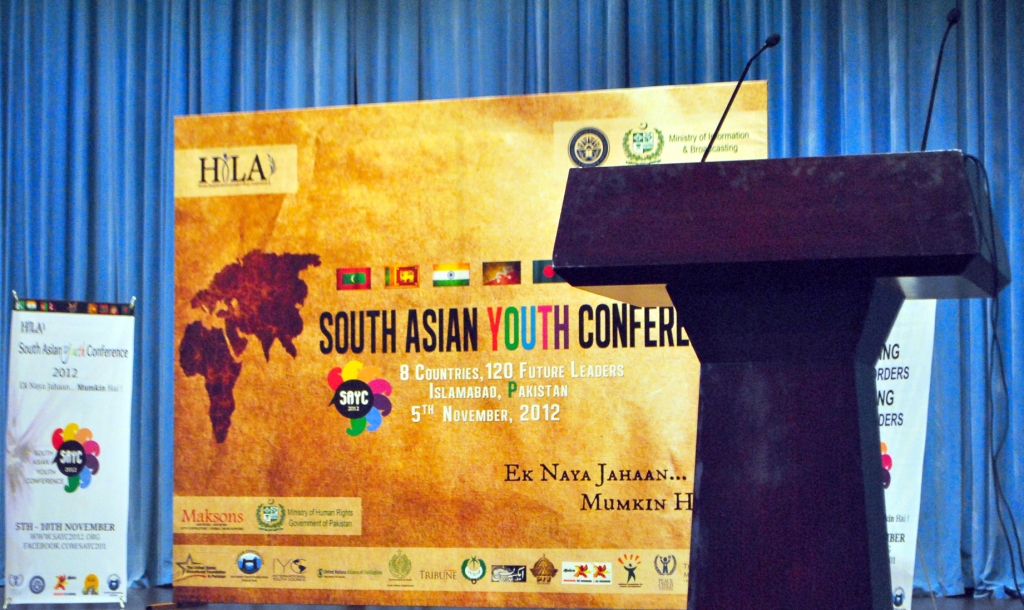 SAYC was formed when a group of South Asian youth joined hands at the fifth World Youth Congress in Turkey. BRM, the Blue Ribbon Movement, a Mumbai based social organization is the driving force behind this conference.

The first edition of the conference was held in Bangalore and the 2012 edition moved to Pakistan. Ideally speaking, after what happened to the Sri Lankan cricket team in 2009, Pakistan was not the best country to organize a Youth Conference.

However, there are exceptions, and SAYC 2012 proved to be one. SAYC 2012 turned out to be a successful event which focused not on the wish-lists but real-time action plans.

Hill Post spoke to some of the delegates from India and Pakistan and not so surprisingly, the young generation wants the ties between these two nations to be stronger and better. Every delegate, Indian or Pakistani, we spoke to expressed their desire to see the other side of the border.

Aditya Dave, a final year engineering student at BITS Pilani said, “I was going to the dreaded terror land that’s what I thought and even people around me said the same. However, the other side of border surprised me because they are no different than us. The love I received from ‘Pakistanis’ and the generous ‘Indian discounts’ by shopkeepers just left me in awe of their (our) cultural values. SAYC is a wonderful initiative and I am proud to be a part of it.”

Ayesha Ilyas from Peshawar, who was a part of the SAYC I held in Bangalore, reciprocated similar feelings.

“SAYC last year broadened my vision to places as far as Maldives and Nepal that were otherwise alien lands for me. This year it gave me some more reasons to be happy with my life, to be proud of who I am; a Pakistani! I am glad that they had a good time in my country and they are back home safely because they weren’t just 120 people they were 120 families, 120 friend circles who now have a soft corner for Pakistan, for whom Pakistan is no more an enemy”, said Ayesha.

The conference was attended by more than 30 Indian delegates and every one of them now holds a different opinion about Pakistan.

“The country is no more our enemy, it never was. SAYC helped us all to understand our neighbor and the cause of our problems. There are issues between both the countries but unless we are ready to sit and talk like educated human beings, both the countries will keep fighting. We, as the youth of this region, have to step up and initiate a change making process”, was the collective response of delegates from both the nations.

SAYC has initiated a change for sure. The VISA formalities are no more stringent and with young people looking forward to make a change, cross border relationships can flourish again.