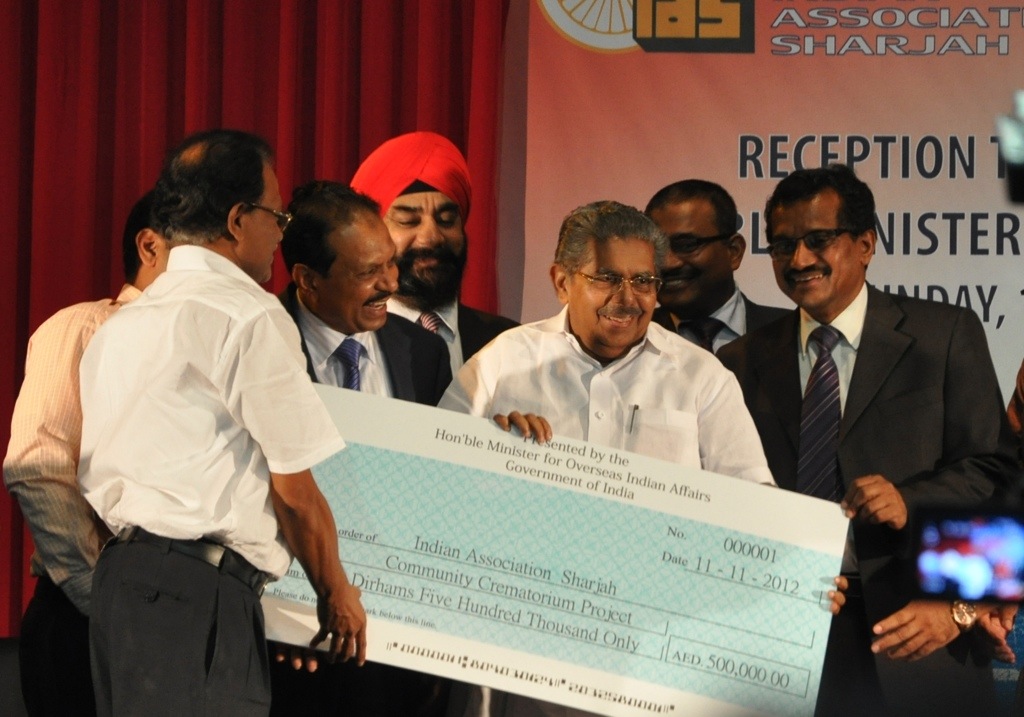 Sharjah: Minister for Overseas Indian Affairs Vayalar Ravi inspected an upcoming multi-faith funeral centre for Indians on the outskirts of this city late Sunday and handed over a cheque for AED 500,000 as New Delhi’s contribution to the AED 6-million ($1.65 million) project.

The funeral centre at Sharjah, which is being executed by the Indian Asociation Sharjah at a cost of $1.65 million, is nearing completion. The association hopes to formally open it within the next three months.

“The committee members are trying to finish it by January-end and we are encouraging the project,” said Vayalar Ravi late Sunday at the site at Juwaiza, some 25 km east of Sharjah on the road to Dhaid, and 15 km beyond the international airport.

Work continued even as the minister inspected the site with the Indian Ambassador to the UAE M.K. Lokesh, Consul General in Dubai Sanjay Verma and well-known Indian businessman M.A. Yousuf Ali, who has contributed AED 100,000 and has offered AED 200,000 more.

The funeral centre, coming up on 8.3 acres of land donated by the Sharjah ruler, will have an incinerator, burial places for Christians and Muslims and a prayer hall. There are an estimated 1.75 million Indians in UAE — the largest expatriate community here.

Y.A. Rahim, president of the Indian Association Sharjah, said that the incinerator will be delivered from the US in four weeks and added that the project was coming up thanks to the support of Sharjah ruler, His Highness Sheikh Sultan Bin Mohammed Al Qassimi.

“The ruler graciously donated 8.3 acres of land free of cost. The Sharjah municipality took up the effort of filling the land at a cost of AED 1.1 million,” he said. New Delhi’s contribution has come from the Indian Community Welfare Fund (ICWF).

The ICWF is maintained by Indian embassies and consulates to assist distressed Indians in host countries, and the budgetary allocation to the fund is made by the Ministry of Overseas Indian Affairs (MOIA).

The Indian Association Sharjah, too, has put in a large sum for the centre apart from donations from prominent NRI businessmen like Vasu Shroff, M.A. Yousuf Ali, S.P. Singh and the Gurdwara committee in Bur Dubai apart from other donors.

“We started the project with AED 500,000 from our side. Now we have paid AED 800,000,” said Biju Soman, general secretary of the Indian Association Sharjah.

Ali, managing director of the EMKE Group, handed over his contribution at the event. “I congratulate the Indian Association for taking the lead in realising a long cherished dream of the poor who are unable to take their deceased near and dear ones to their country.”

The Indian community in the UAE records just over 1,200 deaths annually. But families of many of the deceased find it difficult to bring the body back to India due to legal procedures involved and the high cost of air travel.

There is a crematorium in Dubai, but inter-Emirate transfer of dead bodies often needs a lot of documentation and police reports. The new facility also aims to ease these legal hassles.

Besides Sharjah, the new facility hopes to cater to Indians living in Sharjah and other Northern Emirates like Umm Al Quwain, Ajman, Fujairah and Ras Al Khaimah.