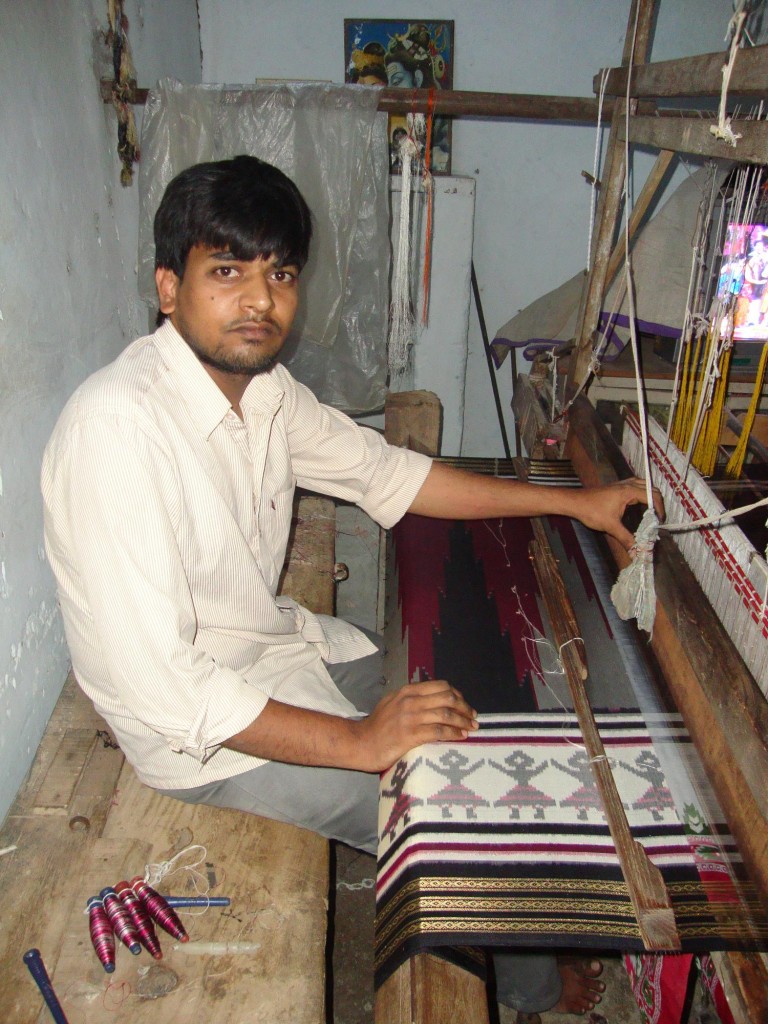 Pochampally: Pera Kamalana sits in a small room of her house, spinning the dyed yarn that will bring alive beautiful ikat designs on the nine-yard silk sari Pochampally is famous for. Wearing a polyester sari herself, Kamalana’s life is, however, an irony and hardly as exotic as the timeless creations her loom gives birth to.

“I can’t afford to wear a Pochampally silk sari,” said Kamalana, when asked if she had any special creation in her wardrobe.

She, however, admitted that she did own a cotton sari she had herself woven. “But I mostly wear polyester saris. They’re cheaper”.

For weavers of the famed Pochampally sari in the Bhoodan Pochampally village of Andhra Pradesh, life is as complicated as the warp and weft of the fabric they weave.

For the skilled work they do, their wages are low and therefore survival is a struggle.

Kamalana and her family members are among the dwindling number of weavers of the village who have not yet given up the skilful craft passed down through generations.

But unlike them, there are many who have moved away from the craft for more viable means of livelihood.

“I get Rs.3,500 a month for weaving saris,” said Kamalana’s 20-year-old son Shiv Shankar while working on a purple and pink sari on the loom.

“I take about three days to weave one silk sari, but the whole process of making a Pochampally sari is much longer. There is the dyeing process. The designing weaving is the last stage. So it takes longer,” he said.

Kamalana’s household income hardly surpasses Rs.8,000 a month. Ironically, each of its creation costs around the same or more by the time it reaches a retail shop.

The uniqueness of the ikat design lies in the fact that instead of dyeing the fabric, in this case, every thread is dyed in a pattern, and then woven in accordance with the design into the cloth. It is therefore a long-drawn process. The design of the end product looks the same on both sides of the fabric.

“We are aware that our creation costs a lot in the market. But that is the amount a middleman pays us and we don’t have much of a choice since we don’t have the kind of reach in the cities like he does to sell our products,” said M. Anjayya, another weaver.

“Weaving a Pochampally sari is an art. But because sustaining on it is becoming difficult, people are moving away from it. My son is not interested in taking it up for a living and wants to open a bike repair shop instead. Can I blame him?” Anjayya said.

In the nearby Handloom Park, set up by the union ministry of textiles and which employs about 400 weavers to make a host of products including bed spreads, table covers, quilt covers and bags, apart from saris, the condition of the workers is comparatively better.

S.N. Das, who works in the marketing department of the Handloom Park, said its weavers got better wages than those who wove at home.

“Depending on the complexity of the work, our weavers get Rs.4,000 to 6,000 a month as wages. There are some who also get paid around Rs.150 per metre of the cloth they weave, or per piece,” said Das told .

“Also, the entire process of making a Pochampally sari is long, and at home all members of the family are involved in different processes for a single sari. Here, there are different departments for processing the thread and for designing and weaving. We make about seven saris in 45 days,” he said.

While designs on the saris woven in homes are mostly traditional, those in the Handloom Park have modern designs as well, courtesy a team of designers.

If these challenges were not enough, Pochampally sari weavers also face competition from powerlooms which copy the designs and the products are sold at lower prices.

“The silk we use for Pochampalli sari is sourced from Bangalore and the cotton from Coimbatore. These days, China silk is used by powerlooms, but they don’t suit us. Those saris have more shine, but not the sheen of a Pochampally, and are cheaper,” Das said.

“The challenges are many, but we are still managing to continue with our craft,” Anjappa said.