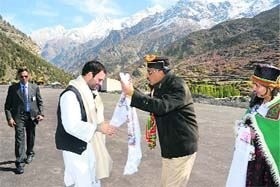 Keylong: Congress leader Rahul Gandhi is the only politician who dared to brave the harsh wintry conditions in Himachal Pradesh’s Lahaul Valley to woo the electorate ahead of the Nov 4 state elections.

The picturesque valley in Lahaul-Spiti district, known in the country for growing sweet potatoes and bitter hops, has also set an example with the highest gender ratio of 1,017 females for 1,000 males in the country as per the 2011 census.

“No national or state-level politician of any party, except Rahul-ji, has come here since the (Oct 3) announcement of polls,” said octogenarian Neena Bodh, a farmer and resident of a village on the outskirts of Keylong.

She said before the announcement of the elections, Chief Minister Prem Kumar Dhumal had come to district headquarters Keylong, some 450 km from state capital Shimla, on a day’s official tour.

“After the rally, Gandhi interacted with the locals and tried to understand our issues and problems,” Tashi Kardo, a teenager, said.

He said Gandhi had shown keen interest on the impact of upcoming hydropower projects on the Chenab river basin, which falls largely in the Lahaul-Spiti region (above 2,500 metres).

The entire district, characterised by fragile and loose mountains, is prone to avalanches and landslides. It has been witnessing protests over hydro projects that the locals fear would impact their livelihood and dry up natural water sources.

Kardo said Gandhi also promised that the construction of the 8.8 km Rohtang tunnel, which will ensure all-weather connectivity to Keylong from Manali town, would be completed within the February 2015 timeframe.

In the absence of Rohtang tunnel, the entire Lahaul Valley remains cut off from the rest of the country for more than six months a year owing to closure of road links due to heavy snowfall.

Lahaul-Spiti, a seat dominated by tribals, has six candidates in the fray. The main contest is between BJP’s sitting legislator Ram Lal Markandey and Congress’ greenhorn Ravi Thakur, whose mother the late Lata Thakur, was the first woman legislator from Lahaul-Spiti.