Srinagar: Better management of bears’ natural habitats and using physical barriers and other things to keep the animals out of human habitations are among the measures suggested at an international workshop here on curbing bear-man conflict.

Scientists and officials of the state wildlife department, participating in the international workshop here Thursday, suggested a number of ways to avoid the growing conflict between bear and man. 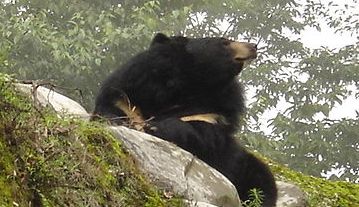 Besides putting up physical barriers to keep the animals out and using things that could deter bears from entering human habitations, they suggested: avoiding behaviour that bears are averse to; managing the growth of numbers of wild bears; better management of the bears’ natural habitats; and removal of animals from areas where attacks on humans are likely.

As human habitations spread and encroach on the natural habitats of wild animals, the state has been witnessing increasing instances of attacks on humans by bears, leopards and jackals, which prowl around the villages on the foothills adjacent to wildlife sanctuaries.

Four people were killed and over 24 were injured in attacks by bears in the Kashmir Valley this year.

Participants at the workshop pointed out that the animals are lured by easy availability of food in human habitations, and that a better management of food waste could go some way in preventing man-animal conflict.

Participants, however, ruled out bear hunting as a means of controlling their numbers and conflict with humans.

“Sport-hunting as a strategy for controlling the population of wild animals is risky, especially when we deal with endangered or small populations of bears,” a paper read at the workshop said.