Dehra Dun: For decades the planners cared a fig about the migration routes of the elephants and developmental works, in the form of road, canals and other projects came up at random, forcing the pachyderms to stop their traditional migration and be confined in small pockets, which are hardly able to sustain the herds. 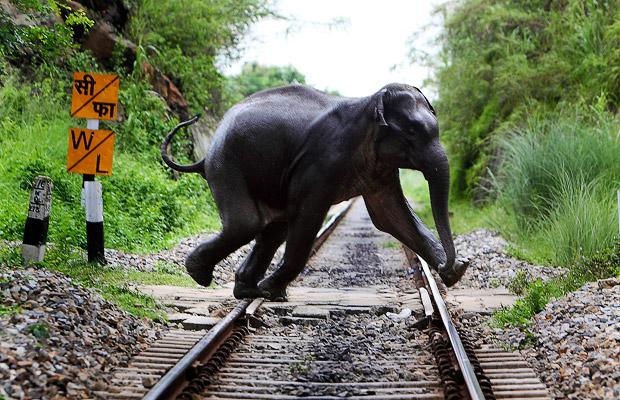 But now the shoe is in the other foot. The elephants are now forcing the authorities to close down national highways during certain hours when the pachyderms want the roads for themselves and no intruders are allowed on it. In fact they are known to even attack cars and damage them, should the drivers not take heed.

Concerned at the number of attacks by wild herds on cars and passersby, the Rishikesh Range forest officers have written to the senior department officers and the district authorities that the Degra Dun-Rishikesh road be closed for traffic after sunset at about 7 p m to till the sun rises in the morning that is 7 A.M.

They have said in no kind words that the attacks of elephants are on the rise and they are now known to even attack speeding cars moving on the highway. They have made it clear that on quite a few occasions the drivers of the vehicles stop their vehicles to see the pachyderms on the roadside and stop their cars, which given them the chance to attack the vehicles.

The Rishikesh Range officers have written that even now they were finding it hard to drive the elephants from the roads to inside the forests, and as such to prevent any major tragedy from happening and innocent lives being lost, it will be in the interest of the people that all vehicular traffic on the highway is banned from sunset to sunrise.

As per their report they have suggested that a barrier be put up a barrier at the Rishikesh Range office on the Rishikesh side and Ranipokhri on the Dehra Dun side, which will be downed at 7 p m. Before lifting the barrier at 7 in the morning, the staff will first have a round between the two barriers to ensure that all the elephants have gone back to the forests, only after which they will be opened for public.

A forest department staff of the Rishikesh Range admitted that the proposal for the barriers on the road had been sent to the department and also the district administration and the decision of the higher ups in this regard is awaited.

He, however, hastened to add that it would not be a permanent affair and a watch would be kept on the elephant movement in the region and if they go back to the deeper forests, the barriers would be kept open for the free flow of traffic.