London: Dogs learn to link words with the shapes of objects, unlike humans who associate them with their size or texture, says a new research.

For example, toddlers who learn what a ball is, and are then presented other objects with similar shapes, sizes or textures, will identify a similarly-shaped object as ball, rather than one of the same size or texture. 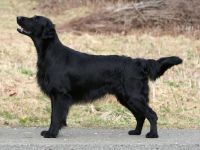 Earlier studies have shown that dogs can learn to link words with categories of objects (such as toy). But whether their learning process was the same as that of humans was not known, the journal Public Library of Science ONE reports.

In this new study, Emile van der Zee and colleagues from the University of Lincoln, UK, presented Gable, a five-year-old Border Collie, with similar choices to see if the shape bias exists in dogs, according to a Lincoln statement.

The researchers found that after a brief training period, Gable learned to associate the name of an object with its size; identified other objects of similar size by the same name.

The results suggest that dogs (or at least Gable) process and associate words with objects in qualitatively different ways than humans do.

The researchers add that this may be due to differences in how evolutionary history has shaped human and dog senses of perceiving shape, texture or size.

Although your dog understands the command, “fetch the ball,” it may think of the object in a very different way than you do.