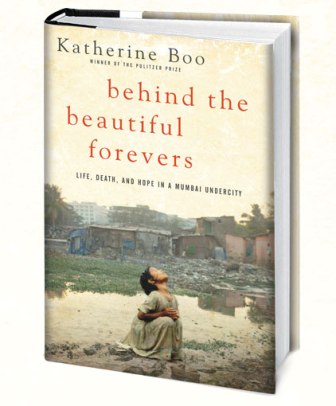 New Delhi: A book on lives of people in a Mumbai slum has won this year’s National Book Award for Non-Fiction in the United States.

“Behind The Beautiful Forevers”, written by American journalist Katherine Boo, is an account of Annawadi, a makeshift settlement near Mumbai airport. The award was announced Wednesday in New York.

“…there was a lack of depth to the reporting on how India’s phenomenal growth was affecting daily lives in low-income communities and particularly the lives of ordinary women and children. It took two years of immersion and investigative reporting before I began to sense what the larger story might be,” Boo was quoted as telling an interviewer on the award website.

Boo’s book beat Anne Applebaum’s “Iron Curtain: The Crushing of Eastern Europe, 1945-1956”, Robert A. Caro’s “The Passage of Power: The Years of Lyndon Johnson, Volume 4” , Domingo Martinez’s “The Boy Kings of Texas” and Anthony Shadid’s “House of Stone: A Memoir of Home, Family, and a Lost Middle East”.

The National Book Award for Fiction was given to novelist Louise Erdrich’s “The Round House”.