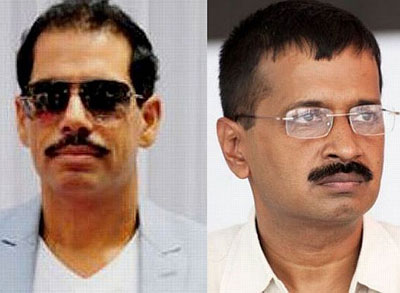 A Magsaysay award winning activist’s war on Congress president Sonia Gandhi’s son-in-law on charges of corruption has set off yet another political storm and media muckraking, raising questions on law, activism, propriety and, of course, growing venality in Indian politics.

From the man on the street to political pundits, everyone has joined the battle sparked off by India Against Corruption’s (IAC) Arvind Kejriwal. But the target – businessman Robert Vadra – has been mostly silent despite unrelenting media attention.

At the heart of it all are charges by Kejriwal, 44, that Vadra, 43, was the beneficiary of controversial land and property deals involving realty major DLF and the Congress government in Haryana.

The accusations have been angrily denied, with an army of Congress ministers and leaders – even while calling him a “private citizen” – coming to the defense of Vadra, who married Gandhi’s daughter Priyanka in 1997 after a heady romance.

The Congress aggression is understandable as the allegations have the potential to sully the image of Sonia Gandhi, who heads India’s ruling coalition and is the most influential politician in the country.

Experts who spoke to IANS were mostly critical of Kejriwal, who captured popular imagination when he teamed up last year with anti-corruption activist Anna Hazare.

“Kejriwal has mastered the art of flinging allegations,” eminent lawyer Harish Salve said. Asked what implications the Kejriwal attack would have on politics, he answered: “Unfortunately, mud sticks.”

Historian Mridula Mukherjee felt Kejriwal’s accusations were part of a larger assault on the Gandhi family.

Kejriwal has alleged that DLF gave Vadra unsecured loans and provided him a string of property in Gurgaon in Haryana bordering Delhi at below-the-market prices.

This, according to him, was because the Congress government in Haryana extended benefits to DLF in the form of cheap land taken from farmers. The DLF and the Haryana government have issued elaborate denials, only to ignite fresh accusations from an unrelenting Kejriwal.

Kejriwal critics – and there are aplenty – say he is yet to provide documentary evidence to prove a quid-pro-quo involving DLF, Vadra and the Haryana government.

Surprisingly, the reaction of the Indian political class has been mostly muted. Only the BJP has demanded an inquiry into Vadra’s business dealings.

But political sources admit that irrespective of whether or not Kejriwal’s allegations reach a court, they are bound to cast a shadow on the Congress and the Gandhi family.

In politics, perceptions can be deadlier than reality – as was proved in 1989 when Rajiv Gandhi, Sonia Gandhi’s late husband, was voted out over a bribery scandal involving Sweden’s Bofors company although nothing has been proved against him.

Jamia Millia Islamia university’s political science professor Nisar ul Haq, however, felt that the attack on Vadra would not have a major impact on the Congress.

The entire controversy has made Kejriwal a household name, earning for him publicity that he did not garner even when he was campaigning against corruption along with Hazare until recently.

Although of same age, the comparison between Kejriwal and Vadra ends there.

A graduate of the Indian Institute of Technology, Kejriwal became a small time activist even as he joined the Indian Revenue Service as a civil servant.

He left government to champion more than one social cause, with his campaign for the Right to Information winning him the Magsaysay award, often described as Asia’s Nobel Prize. Over time, he resigned his government job to become a full-time anti-corruption activist who recently broke away from Anna Hazare to start a political party.

Vadra was a small businessman in brass and wooden handicrafts when he met Priyanka at a party. His meteoric rise to fortune and his big land deals have always been talked about in Delhi’s social circles but there has never been anything to back these suspicions. The couple have two small children.

Vadra has mostly led a quiet life but he campaigned for the Congress, for the first time, recently. Speaking to a TV channel after Kejriwal’s attack, he denied any wrongdoing. But otherwise, other than indiscreet comments on Facebook, he has maintained silence, letting the Congress bigwigs to speak for him.

The latest revelations may yet unravel more surprises and have unforeseen impact on national politics and government, but what is certain is that India’s public life is set to get even murkier in the months leading up to scheduled elections in 2014 which, many feel, could even happen next year.