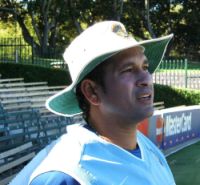 New Delhi: Australian Prime Minister Julia Gillard Tuesday announced that Indian cricketer Sachin Tendulkar would be conferred with a membership of the Order of Australia for his contribution to the sport.

Gillard, who made the announcement during a visit to a cricket clinic here organised by an NGO Magic Bus, said that the “special honour”, known as AM, would be conferred by Australian Cabinet Minister Simon Crean when he visits India soon.

“I’m very pleased we’re going to confer on Sachin Tendulkar membership of the Order of Australia, an AM,” she told reporters.

“He is away playing cricket – surprise, surprise – but the award will be conferred on him by Minister Crean when he visits India.

The prime minister was accompanied by several members of the Australian indigenous cricket team, who are in India to play few exhibition matches.

Gillard was seen mingling with children from the NGO, who were playing a match among themselves. She refused to take up the bat or the ball, saying that she had political differences with John Howard but had learnt some things from watching him.

“I wasn’t tempted to showcase my skills. Number one, because I don’t really have cricketing skills. So that would be a problem,” she said.

“Number two, whilst I didn’t agree with prime minister Howard’s policies in many respects, I watched and learned from his prime ministership and a key lesson is never to pick up a bat in India in front of our friends from the media.”

The order of Australia is divided into general and military divisions, with the following grades in descending order of seniority: