Chandigarh: The genial sardar who not just brought on a smile but also provoked introspection with his biting wit and humour is no more. Jaspal Bhatti, who passed away after a road accident in the early hours of Thursday, was the original king of satire and spoof. He was 57.

His simple smile and disarming warmth struck an instant chord, spreading good cheer. Today, as his body lay covered with a sheet in a Jalandhar hospital, there was gloom all around. 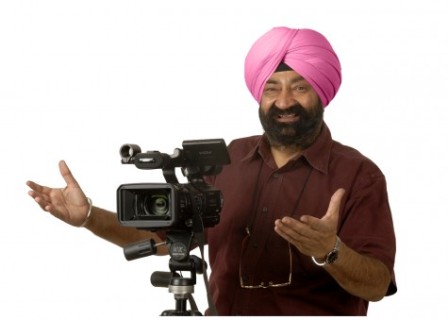 This was the day he was to end his over 40-day promotional tour of his latest film “Power Cut” in Punjab’s cultural capital Jalandhar. The film, which sees the launch of his son Jasraj, is to be released Friday.

The quintessential entertainer till the very end, Bhatti, who was born on March 3, 1955 in Amritsar, was killed near Punjab’s Nakodar town.

An electrical engineer by profession, Bhatti, perhaps the most famous Sikh comedian, had humour and satire in his blood.

It was during his days at Chandigarh’s prestigious Punjab Engineering College (PEC), also the alma mater of astronaut Kalpana Chawla, that he launched his Nonsense Club in the early 1980s to poke fun at social evils and issues. There was no stopping Jaspal Bhatti from then on.

Though he joined the Punjab government as an engineer, Bhatti’s heart and soul lay in comedy and satire. Starting as a cartoonist with English daily The Tribune in the late 1980s, Bhatti later came up with the popular “Ulta-Pulta” on national channel Doordarshan.

Within no time, Bhatti’s satire on social issues became a national hit. He followed it up with another hit TV show, “Flop Show”.

Bhatti was the most visible and popular Sikh of his times, a well loved figure not just in Punjab but in other parts of the country as well. Though he was Chandigarh based, he was a frequent traveller to Mumbai and Delhi for films, TV appearances and shows.

He produced and directed the popular Punjabi film “Mahaul Theek Hai”, a satire on the Punjab police, administration and society, in 1999.

He acted in several Bollywood films. His role as Jolly Good Singh in the Aamir Khan-Kajol starrer “Fanaa” was a particular favourite. He participated in TV shows as a celebrity contestant and a judge.

Married to Savita Bhatti, who acted with him in TV shows and Punjabi films, Bhatti had set up his MAD Arts and film school at Mohali, near Chandigarh, three years ago. His son Jasraj was also involved with him in the venture and film production.

The seriousness of his comedy could be gauged from the fact that the Election Commission of India last year engaged him as their brand ambassador for their awareness campaign.

“I pick up things from simple things in life of everyone. The spoofs on social and corruption issues are liked by people a lot since they can relate to these,” Bhatti told this reporter earlier in the year.

Be it getting on horse-back in a three-piece suit and with a briefcase to protest against the fuel price hike, selling Diwali gifts for politicians and bureaucrats, wearing garlands of pricey vegetables, carrying the idol of ‘corruption devta (god)’ to anti-corruption activist Anna Hazare or playing cricket with his Nonsense Club members on the dry bed of Chandigarh’s famous Sukhna Lake – Bhatti did what he liked best and kept people entertained.

“He used to instantly think of ideas and would put up a satire show at a public place within hours. People liked the way he highlighted the issues. We are all shocked and stunned that he is no more,” Vinod Sharma, Bhatti’s close associate for over 25 years and theatre actor said.

His spoofs, satire and comedy kept us entertained for years. Jaspal Bhatti, you will be missed.