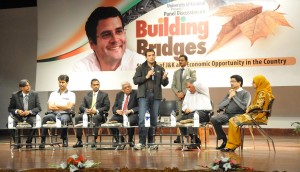 Srinagar: Amid anti-India slogans outside, Congress General Secretary Rahul Gandhi along with business tycoons like Ratan Tata and Kumar Mangalam Birla  assured students of new business opportunities during an interactive session with students of the Kashmir University (KU) here on Friday in the varsity’s convocation complex.

The event was aimed at allaying the fears of big business houses to set up shop in Kashmir.

Gandhi, who had brought some of the leading businessmen in the country to interact with the students of Kashmir University, said his main aim was to build trust and a long-term relationship with the youth of the state.

“It has been a real step forward to have a conversation with the great wealth of human capital that exists here. What Mr. Gandhi has done is not open a window, but open a door,” Tata said.

During the breakfast meeting, they explored the possibility of cooperation in information technology, hospitality, agro-product and horticulture sector, officials said.

Both agreed that a top-level delegation from the state government and the Tata group will meet soon to discuss mutually.

Tata said he was in favor of widening the presence of his group of companies across the state, the officials said. The 74-year-old industrialist recalled his fond memories of visits to Kashmir Valley with his grandfather and stay at a house boat in Nigeel Lake to which the Chief Minister extended an invitation to him to relive his childhood memories.