Chandigarh : A senior Haryana official, who has been transferred, cancelled on his last day the mutation of a prime plot in Manesar area of Gurgaon district that was sold by UPA chairperson Sonia Gandhi’s son-in-law Robert Vadra’s company to realty giant DLF for Rs.58 crore. 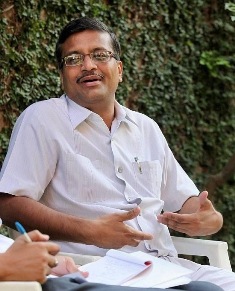 In what could be an embarrassment for the Congress government in Haryana, the mutation was cancelled Monday evening by Ashok Khemka, who was shunted out by the Haryana government Oct 11 as director general of Land Consolidation and Land Records-cum-inspector general of Registration. Monday (Oct 15) was his last day in office. The cancellation order shows.

The immediate fallout of the mutation cancellation would be that DLF would not be able get the title of the prime land, measuring over 3.5 acres, transferred to its name. The land will remain in the name of Vadra’s company M/s Sky Light Hospitality. The land was sold to DLF Sep 18 this year though the agreement to sell was executed in June 2008.

Documents show that Khemka had Oct 8 initiated a probe into the land deals done by Vadra and his companies in four districts of Haryana adjoining Delhi. He was transferred just three days later by the Bhupinder Singh Hooda government as as managing director of the Haryana Seeds Development Corp, considered a junior and side-line posting.

On Oct 12, one day after his transfer, Khemka directed the deputy commissioners of four districts near Delhi – Gurgaon, Mewat, Faridabad and Palwal – to inspect all documents of land deals by Vadra and his companies from 2005 to present to probe under-valuation of property to evade stamp duty. He sought a report on this by Oct 25.

“The mutation has been cancelled on technical grounds. The officer (who did the mutation), was not authorised to do so under the Consolidation Act,” Khemka said here.

In his order dated Oct 15, Khemka stated that the mutation was being cancelled on the ground that it violated the Consolidation Act as it was done by the assistant consolidation officer and not by a designated revenue officer. Khemka also pointed out that other officials had not gone by the rules in allowing the registration of the prime plot in DLF’s name.

According to Khemka’s order, Vadra’s company had purchased the prime land, located on the Manesar-Gurgaon road, in February 2008 for Rs.7.5 crore. A month later, in March 2008, Vadra’s company was given a licence by Haryana’s town and country planning (TCP) department to develop a housing colony on this site. Vadra entered into an “agreement to sell” with DLF within 65 days of the licence being granted for Rs.58 crore.

The TCP renewed the housing colony licence in January 2011 in the name of Vadra’s company though he had got nearly Rs.50 crore from DLF till October 2009 under the sale agreement executed earlier. Khemka, in his order, has questioned this also.

In New Delhi, activist Arvind Kejriwal said that an “honest officer” had been transferred out for exposing the DLF-Vadra land scam.

“The price of the land went up from just Rs.7.5 crore to Rs.58 crore in a matter of days,” Kejriwal pointed out Tuesday.

In a letter to Haryana’s chief secretary, Khemka objected to his latest “abrupt transfer”. He sought the reasons for his sudden transfer.

Khemka said he had seen over 40 transfers in 21 years of service in the Indian Administrative Service (IAS).