Park Jae Sang, better known as PSY has taken over the Internet and become an overnight star and favorite even with people who don’t understand a word he says. Being called the new ‘King of K-Pop (Korean Pop)’, PSY’s rise has been phenomenal.

How did he do this? 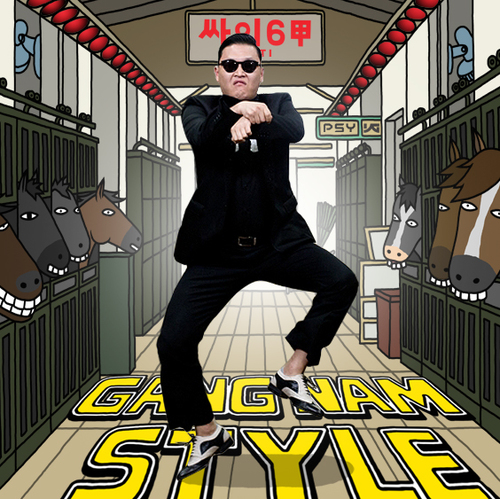 The South Korean singer and rapper’s new pop single ‘Gangnam Style’ became a viral sensation over the internet. Released in mid-July 2012, the highly entertaining video has an astounding 95 million views within a month of its release, 8 million in the first two weeks alone and the numbers continue to increase daily.

The video has over 3,370,000 likes and is #1 on YouTube 100. The song has leapt from number 9 to number 1 on the Social 50 chart which ranks the most popular artists on YouTube, Vevo, Facebook, Twitter, and MySpace.

Moreover, the album itself has sold 23,000 records according to Nielsen SoundScan. Billboard Magazine recently reported that PSY has jumped up 8 spots on the weekly Billboard Social 50, beating Taylor Swift for the number one position.

With celebrities like Britney Spears, Vanessa Hudgens, T-Pain, Nelly Furtado, and Robbie Williams, to name a few, endorsing the video and promoting it, Gangnam Style is the most watched K- Pop video ever. About 47% of the views came from the United States, 7% from the United Kingdom, 6.8% from Canada and 4% from South Korea.

India too is not far behind. Anoushka Chitransh, a class tenth student says, “I’ve been following the K-Pop scene for a while but this video beats them all, hands down. I’m in love with the song.” This has made the video surpass heavy contenders like Taylor Swift, Nicki Minaj, Maroon 5, Katy Perry and Justin Bieber for the most watched music video on iTunes, a mere three days after debuting at #2 on August 18.

Akanksha Namdeo, a third year fashion student, agrees with Anoushka, “The entire dance and the beats are very trippy and catchy. The humour quotient is an added advantage.” “Wow. I did not understand any part of the song but it’s still so catchy”, opines Anshika Kayastha, a journalism student. Fans in the US recently organised a Gangnam Style flash mob on 18th August in California. The surprise guest of the event was PSY himself.

A Los Angeles’ Dodger stadium employee went a step ahead and played the song on the PA when he saw PSY sitting in the audience. The top 40 radio station, KAMP, Los Angeles, played the song 24 times while Rhythmic KDDB Honolulu played it 57 times. All these are laurels in PSY’s cap.

While the world at large, is accepting the song, it has received its fair share of criticism too. PSY has been compared to North Korea’s military dictator Kim Jong II by the Berliner Zeitung, a German daily and Stern, a weekly news magazine. The signature ‘horse riding’ move has been called bizarre and the Der Bund, a Swiss German language daily mocked the growing popularity by saying ‘dancing stupidly wins you half the race.’

The Sydney Morning Herald, an Australian broadsheet called it a “social satire” dissecting the extravagances of a society drowning in debt.

The video and the song itself are about a posh neighbourhood in Seoul called Gangnam with PSY playing a Gangnam man.  It depicts PSY dancing in various Gangnam locales and other uber cool spots such as a yoga session or a hot tub, signs of sophistication and good living. Therefore, the song comes across as a satire talking about consumerism and the ‘haves’ of the society. It talks about their expectations from life and the kind of women they admire.

This song marks the growing influence and spread of Hallyu in India and the world. The Korean wave, as hallyu is commonly referred as, is spreading like wild fire across the subcontinent with an increasing number of people from Delhi to Bangalore following South Korean entertainment and culture.

Roshy Hussain, a college student, has been following Korean dramas for quite some time, “I keep introducing more and more people to this wonderful industry. The music is also very good.” Whatever the reason, even the Republic of Korea consulate in Delhi has been encouraging this cultural exchange with the Korea India Cultural Expressions page on Facebook.

Whatever the reason maybe, the instant success of Gangnam Style has once again catapulted Korea into the limelight and has highlighted the growing influence and popularity of Korean culture in the world.