Shimla: New districts, free medicines in government hospitals, promoting cement industry, tapping more hydroelectric power, increasing daily wages and providing induction heaters for cooking purposes so as to reduce the impact of high cost LPG gas were some of the main highlights that BJP spelled out in it election manifesto here today. 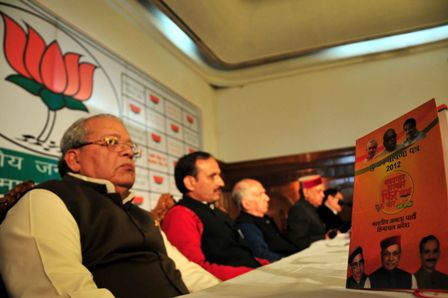 Reading out  from the party’s vision document, chief minister Prem Kumar Dhumal said that as Himachal had surplus electricity, the party on being returned to power would in a phased manner provide all residents with induction heaters for cooking needs.

“Providing subsidized LPG gas was the union government’s mandate and at a time when the gas prices was getting out of reach for common man, BJP in Himachal would want to replace gas with electric cooking,” he said.

For a better healthcare system a new policy would be made and in government hospitals free medicines would be made available to all categories of patients, said Dhumal.

At the outset the manifesto states that where necessary, new districts would be made, all land records would be computerized and an anti-corruption centre would be established in each district.

Unlike the congress manifesto, BJP has refrained from announcing an unemployment allowance but states that 10 lakh jobs would be created over the next five years.

Notwithstanding the controversy about many private universities having mushroomed across the state, the vision documents says that in far off place need based new universities would be opened.

He added that new universities would be opened in the districts of Mandi, Kullu, Chamba and Bilaspur, where presently there were no private universities.

Facing charges about private universities having bought more land than required which could be diverted for other purposes, the manifesto spells it out that such land would be used only for educational purposes and no change in land use would be permitted.

BJP also plans to open a new legal and Sanskrit university. College lecturers would be entitled for promotion up to level of professor.

Other than providing free uniforms to all school children till 10th class the party as part of  its election agenda has proposed to be give a free school bag with one dictionary also to them.

The party intends to encourage cement, fruits, floriculture and medicinal plants based industries in the state.

The party proposes to increase daily wages to Rs 250, reduce loan interest for farmers from 4 to 2 percent, advance loans to those opting for self employment avenues at 2 percent interest, regularize all contract employees after 5 years of service and in five years procure 500 buses for providing better transport services.

The party also commits to reward those panchayats which register over 90 percent  voting turnout and provide financial security for all single women in the state.