Shimla:It is election season in hilly Himachal Pradesh and many among the hundreds of candidates wooing voters in different constituencies are former bureaucrats and professors.

From Rampur to Nalagarh and from Theog to Lahaul and Spiti, parties have put their faith on non-politicians to clinch legislators’ seats in the state assembly.

P.S. Draik is a BJP candidate from Rampur in Shimla district. He resigned from the Indian Administrative Service (IAS) to jump into the electoral battle.

“As a political leader, you can serve the common man in a better way,” said Draik. 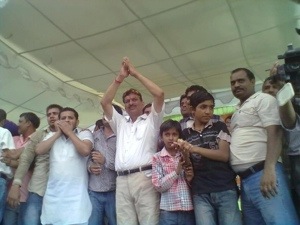 In Nalagarh in Solan district, the BJP has fielded former irrigation and public health engineer K.L. Thakur. He took voluntary retirement to contest the polls.

Thakur said that if he won, his experience in governance would help him deliver services to the people.

“As a government functionary, you can’t work freely. But being in politics, you have more freedom,” said Thakur.

Pramod Sharma, a professor in Himachal Pradesh University’s business administration department, is trying his luck from Theog in Shimla district as a Trinamool Congress candidate.

Sharma had earlier contested assembly polls twice as an independent from Kumarsen but had lost.

A.C. Paul, a law professor from the university, too is contesting as an independent candidate from Arki in Solan district.

Both Sharma and Paul have taken leave from the university to contest the polls.

Chander Mohan Parsheera, an assistant professor from the university’s tourism department, is contesting on the BJP ticket from Lahaul and Spiti.

In the November by-polls for two seats, the BJP had fielded former Himachal Pradesh Administrative officer Hirday Ram from Renuka in Sirmaur district.
He won and is again trying his luck.

In the 2007 polls, Nand Lal, an officer who was part of Congress president Sonia Gandhi’s security cover, got a Congress ticket for Rampur, replacing six-time winner Singhi Ram. He won and the legislator is again contesting.

“My experience in politics is quite good. Of course, it gives me a chance to serve my people,” Lal said.

Then there are some who have tried to contest the polls but have been denied tickets.

A.S. Chandel, an horticulture scientist at Y.S. Parmar University of Horticulture and Forestry in Solan, took voluntary retirement to contest the polls from Theog. But he was later denied a ticket by the BJP.

Beni Prasad, who resigned some months ago as regional manager of the Himachal Road Transport Corporation, was denied a ticket by the Congress. He is now canvassing for the party’s candidate in Palampur.

As many as 4.59 million voters will cast their ballots Nov 4 at 7,253 polling stations in the state.