Shimla: Facing the heat of corruption and scams in Delhi, the Congress party in its manifesto pitched for providing a corruption free government in Himachal should the party overthrow the BJP in the November 4 poll.

Free laptops for 10,000 meritorious students, an unemployment allowance for education youth whose annual family income was less than Rs 2 Lakh, a university for journalism and communication, free bus passes for middle and higher education students, an investment of Rs 500 crore for setting up a skill development corporation to tackle the problem of unemployment, an international airport for Shimla, among others were some of the proposals set for in the manifesto.

A foreword to the vision document, mentioned that BJP government had damaged the reputation and prospects of the state, development had been brought to absolutely low levels, trust of the people had been breached all limits of corruption had been breached.

Mentioning that all illegal activities of the past five years would be inquired into and accountability would be fixed, the documents alleges that a coterie of corrupt businessmen and handpicked officials had influenced the decision making process, a period during which mining and land mafia thrived.

While committing for making efforts to provide a fair, impartial and corruption free administration, the reforms under the party radar include setting up an administrative commission to look into re-organisation of tehsils, sub-divisions and districts for better governance purposes. 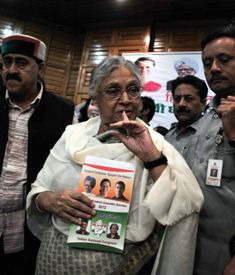 Without recording that the state administrative tribunal would be revived, something that the BJP government had dispensed with, the manifesto talks about having tribunals at Mandi and Dharamshala.

Another faux pass the party manifesto records is that after the UPA government curtailed the industrial package for the state, the document mentions that benefits of the package would be extended to industries set up in remote and interior parts of the state.

Even though Anand Sharma is the minister for industry and commerce and was instrumental in preparing the party manifesto, the document mentions proposes to increase import and custom duty on apples by atleast three times to save the state farmers.

Fruit growers have been making the demand for the past many years and the commerce ministry has turned it down on earlier occasions.

Even though Shimla was one of the original mission cities under the Jawaharlal Nehru Renewal Mission (JNRM) when the program was announced, the congress manifesto mentions about extending the mission to Shimla. Mandi, Hamirpur and Dharmshala are also proposed to brought under the mission.

Speaking on the occasion Delhi Chief minister Shiela Dixshit said that FDI in retail would be of special benefit for Himachal as much needed investments would help to establish cool chains for transport of fruits and off season vegetables.

In response to a question about the congress election campaign being a fractured on, Sharma responded that it was a collective effort. “The real campaign would only start after withdrawal date” he said.

Before ending the conference call that had the presence of a large number of congress workers, Virbhadra Singh said that a point missing in the election manifesto about regularizing all para and PTA teachers would be included into it.