Shimla: Not an investigation by Central Bureau of Investigation but one by a Special Investigation Unit is what BJP here today demanded on the alleged bribe payment expose in the steel ministry made on Friday by a television channel. 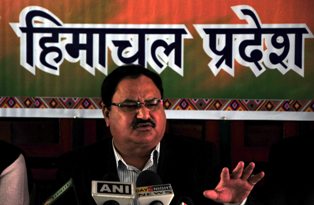 Talking to reporters BJP spokesman JP Nadda said, “all are keen to know who VBS is in the Income Tax document that questions cash payments of Rs 2.28 crore made in the steel ministry between October 2009 and December 2010.”

“The IT query was even submitted before the central vigilance officer (CVO) of the steel ministry but the matter has not been investigated,” he added.

The period under contention was a time when Virbhadra Singh was the union steel minister and the former minister also should respond who VBS is on the documents seized from IT raids made on ISPAT Steel, a company that was running a Rs 700 crore default in payments, claimed the BJP spokesman.

Saying that congress lacked moral courage to fight graft, Nadda demanded that since the matter was neither investigated by the IT department or the CVO of the steel ministry, the case should be probed by a special investigation unit as the CBI was playing into the hands of the UPA government.

Mentioning the 2G scam, coalgate scam, congress leaders vehemently defending the Vadra – DLF property deals, he said that even though Virbhadra Singh was made to resign from the union ministry following framing of corruption charges by a trial court, yet the Congress high command not only rewarded the tainted leader by appointing him as state party president and have given him charge of leading the election campaign in Himachal.

Reacting to the news reports about bribery charges, Virbhadra Singh in a communiqué said that it was a BJP game plan to unleash false propaganda coinciding with state elections.

“I only use VS and not VBS as my initials,” he said.

Denying any favours to ISPAT industries, the former union minister said that “once elections are over, I will take legal action against all those behind this false, motivated and negative campaign.”

Questioning the timing of the news item, he said that ‘neither the IT department nor any other government agency has ever questioned me on anything pertaining to what is being reported in the media.”

Terming it as a cheap publicity stunt raked up at a time when election code of conduct is in force, the five time former chief minister said that he was willing to be subjected to any inquiry by any agency.